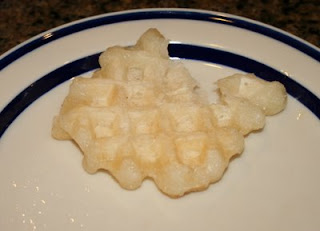 Sweet pounded glutinous rice cakes are traditional for the lunar New Year in most East Asian cultures. Probably best known as "mochi" off the Japanese version, they are served really year around, but hold a special significance for the New Year. I am not really sure why. The texture is particularly revered, and one that I really enjoy. I am accustomed to purchasing prepared mochi, but really should make it myself more often - it isn't that difficult now that mochi flour (mochiko) is readily available. Specially since sometimes, a certain mochi product may not be readily available on the store shelves.

Well, once more in Casa McBardo, we create the real thing - the actual moffle - by taking a slab of mochi dough, and cooking in a waffle iron. Took a couple of tries to get it right (mochi dough grills well, but can take quite a bit of high heat), but it's a success. A moffle has a crunchy exterior and that addictive interior stickiness that is at once comforting and filling. Maple syrup, however, is not prescribed - doesn't seem to work, flavorwise. A simple sprinkling of sugar does.

A version I am going to investigate in the future is coconut milk mochi, which is then grillled, and served with fruit. Sandwich moffles are also a possibility. I'll have to prowl around for a waffle iron.
Posted by Dr. Ricky at 1/04/2009 11:22:00 PM