"Let's face it -- kids are not consuming enough milk today"

and goes on to decry the predominance of artificially sweetened milk in markets, exhorting us (presumably, parents) to teach kids that unsweetened milk is "natural" and healthy.

Let's take a step back, and look at some facts.

1. Milk is not an essential food product. Most mammals (in fact, most humans - but that should be obvious from mammals, right?) stop consuming milk post weaning, and developmentally shut down milk digestion. Lactase persistence is the uncommon condition that permits milk consumption, and is restricted to just a few pockets of humanity. The fact that Ms. Dunn thinks that children aren't consuming enough milk tells me that her perspective comes from this idea that other "kinds" of children don't count. Most children post nursing would have a hard time digesting milk.

2. Milk contains plenty of sugar already. In fact, the going rate is about 5% lactose in cow's milk - that's about 4 teaspoons in a 12 ounce serving...wait, isn't that like soda? It's just that you cannot perceive the sweetness of the lactose in the same way as sucrose, but guess what, sucrose and lactose are chemically very similar, and have notably similar digestion pathways (with the exception of the lactase step).

But what really bugs me is Ms. Dunn's obstinate parroting of pseudoscience and subtle propaganda. For example, she writes

That is an unjust characterization of the issue - it doesn't fit the current FDA technical definition. Her choice of words are meant to emotionally manipulate the reader. She writes the "research has shown" that artificial sweeteners create cravings for high calorie foods. What research specifically? She also denigrates "chemicals" several times, betraying her inherent chemophobia.

So, this was an article about teaching kids to choose "real food" (whatever that means). I am responding with this: teach our kids to think critically before they are indoctrinated.
Posted by Dr. Ricky at 4/22/2013 01:18:00 PM 2 comments:

One of my guilty pleasures is getting Jumex mango nectar. A Mexican origin product, it's actually pretty good, and relatively inexpensive. But recently, I noticed that the can has received a makeover. Now, since the can, sized for 12 ounce, already contains a shrunken 11.3 ounces, I doubt if the makeover is due to the infamous Grocery Shrink Ray.


How can there be a complete depletion of vitamin A content? Vitamin A is a group of compounds that can be formed from the carotenoids of many yellow and orange fruits and vegetables, such as carrots (from which they are named). Mangos, being a yellow fruit, contain carotenoids. Granted, the reformulated nectar also shrank from 30% juice to 21% juice. The ingredient list is more or less the same. Mystery upon mystery.

But aside from this, how did it taste? Well, the new stuff is thinner, sweeter - less fruity. More or less in line with the lowered juice content. Sadly, I think an old favorite is gone.
Posted by Dr. Ricky at 4/17/2013 01:21:00 PM No comments:

Do you know your E. coli?


You'll hear it quite often in the news nowadays. E. coli found in green leafy vegetables. Beware! People get all panicky about it now - and unlike issues like GMO labeling, this one does merit a little caution. What exactly is E. coli? Well, it is shorthand for Escherichia coli, perhaps one of the best studied bacteria on the planet. Maybe. We'll get back to that shortly.

E. coli is a commensal bacteria - one that coexists with humans (for the record, in the average human body, the bacterial cells outnumber the human cells roughly 10:1 - you are more a constellation of bacterial communities than a single organism). But the name is actually about a group of diverse microbes that live in humans. Some are so benign, their ancestors served as the domesticated workhorses of modern molecular biology. We splice genes into them (heck, we still E. coli as our major engine for most kinds of DNA engineering), make them produce proteins of interest, or even to build genetic networks.

But there's a dark side - some kinds of E. coli harbor the capability to make humans sick. In fact, what you probably hear in the news as E. coli is shorthand for E. coli O157:H7, the outbreak bacteria not to be confused with the benign laboratory bug. But there are others. You'll see the term STEC - that stands for shiga toxin-producing E. coli. Or EHEC - which is enterohemorrhagic E. coli - this one is nasty, causes internal bleeding. All these, and others, get called E. coli because they pass the physiological tests for E. coli - and this microbial classification lets us standardize our procedures once we know.

Except that the human need to classify, to impose order over nature, may actually be counterproductive in this case. A study of 186 E. coli genomes (yes, we've sequenced that many), reveals what we call E. coli is probably a lot of different species. In fact, a different organism called Shigella should actually be classified among the E. coli - and that the diversity is so big that we can probably name six different species out of the E. coli group. Truth is, biology, while beautiful in its unity, rarely divides neatly into the classifications that humans require. And dealing with that complexity is part of the challenge, the excitement and the exasperation of science.
Posted by Dr. Ricky at 4/15/2013 03:06:00 PM No comments:

While in California, I encountered one of the few remaining bakers in the USA who make baumkuchen: cakes cooked on a spit, such that when cut across, the browned layers of cake crust look like tree rings (hence, the name - German for "tree cake"). But, in Southeast Asia, they have a version. And it doesn't need a spit.

Kuih lapis is constructed by building thin layers of batter under a broiler, before pouring the next layer, painstakingly built up to earn the name "thousand layer cake". In contrast, the thousand crepe cake is far easier to construct. 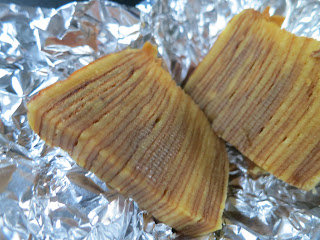 The source of heat can be a charcoal broiler, which infuses the cake with a smokey flavor. Variations of the cake can also be built using different flavored batters, though I suspect that the laborious nature of the confection rarely incorporates quite so many flavors. This video should illustrate what it takes to make one layer. Kuih lapis is found in Singapore, Malaysia and Indonesia.

False beliefs and pseudoscience are comfortably ensconced in most food and food practices in just about all cultures I know of. Though I don't understand it, the emotional connection people have with food seems to trump rational perspectives, such that beliefs and biases will be held on equal footing to evidence. Case in point, Molly Dunn, in the Houston Press, blogs about a list of foods that are mood modifiers, with little more than WebMD to back up the claims (if the name sounds familiar - she had previously written about an old, easily disqualified claim about the sports performance enhancing properties of beer).

While at Norwescon, I was privileged to attend a panel with PZ Myers on detecting pseudoscience and applying critical thinking, and this blog post is chock full of the primary features of pseudoscience: exaggerated claims, misuse of scientific terms (take the old trope about turkey and tryptophan), unfalsifiable ideas, and sloppy referencing.

While such "listicles" - articles consisting primarily of lists - are a common motif in commercially produced blogs to elicit discussion (invariably, these lists will be "incomplete"), there's a difference between opinion and publishing pseudoscientific conclusions. The latter are a parasite on the hard won reputation of science, which was forged in the difficult crucible of peer review and objective study, and we should not stand by uncritical as such claims continue to circulate. Pseudoscientific portals like Mercola and Dr. Oz do a damaging enough job with regards to nutrition and food culture, our local publication could at least not contribute to this intellectual barbarity.
Posted by Dr. Ricky at 4/04/2013 12:26:00 PM No comments:

I recently spent time in Seattle at Norwescon, a science fiction convention, and got to talk about science and speculation about the future of food. While it is fun to speculate, among the scenarios we talked about was the issue about predicted future shortages as the global climate changes. I had to point out that some of the panicked speculation of future food shortages stem from a very first world centric view of what is acceptably food. Shared preferences in food may constitute a primal tribal discriminator in humans, which, of course, means that despite a predicted food shortage, people still worried about the availability of meat.

That leads us to the idea of vat-grown or tissue cultured meat. Although alleging to assuage vegan concerns about killing animals for food, sadly, this process remains expensive and ironic - the growth factors that are used in tissue culture are extracted from other animals. For now, the most cost effective way to make a steak is a cow. Come to think of it, wouldn't it be great if a cow would just regenerate an edible part, and we didn't have to kill the animal?

We could do just that. Animals can be generated with a genetic background that lets them spontaneously generate tumors - which we can harvest for food. Despite any misgivings, there shouldn't be any particularly adverse reactions to eating tumors - it would just be meat. In fact, benign tumors are probably already in some of the meat we eat today. The moral justification would be easier - we are saving the animal's life by lopping off the cancer.

But this is just the beginning, of course. Well behaved cancer stem cells can be used to seed animals, leading to exotic meats that can be cultured on host animals. The transmissible face cancer from Tasmanian devils suggests that a biological mechanism can be built into tumors that can avoid rejection - and then that opens up the possibility of culturing various exotic meats on domestic animals. Or perhaps, another biotech path to acceptable cannibalism that may be morally acceptable to some vegans.
Posted by Dr. Ricky at 4/02/2013 05:01:00 PM 1 comment: