Many would say that popcorn is pretty much the perfect snack food, probably one of the simplest of the processed grains. Popcorn is made, of course, from a particular strain of corn, which contains a certain proportion of moisture in the starch, and a very hard, water- resistant hull. When dropped into a hot environment (be it oil, air, or microwave), the water boils, rupturing the shell, fluffing out the starch into a puffy, crunchy foam, and perhaps propelling the kernel out of the pot. Popped corn is perhaps the more demure cousin to the more predominant way of processing maize - nixtamalization, where corn is treated with alkali to weaken the hull and make nutrients more bioavailable. And converts it to masa - the source of many an antijito.

Popped corn, of course, shows up as accompaniment to Peruvian ceviche - but is also the ubiquitous accompaniment to fake butter flavoring and blockbuster movies. Coupled with textural crunch, the little nooks and crannies serve as pockets to hold on to added flavoring agents - though the very flavor of popcorn itself can be simply accentuated with a little salt. For all of this, popcorn as a snack has a couple of pretty significant flaws: it grows stale rather quickly; it is best freshly popped but has very little shelf life to speak of. I'm sure you'll agree that the prepackaged popped corn cannot hold a candle to the freshly cooked stuff. And then there's a matter of those hulls. Small, thin, very hard, they find themselves lodged into uncomfortable areas in between teeth and gums.

But perhaps processing has solved these flaws.

I recently encountered popcorn chips, where popped corn itself is reformed into flattish triangular chips, mimicking masa-based tortilla chips. I know of at least three manufacturers of these chips, although they all seem to be roughly the same size and shapes, which tells me that there is probably only one type of machine designed to convert popcorn into chips at an industrial scale. The chips definitely have a longer shelf life, having good crunch and flavor (lighter than the traditional tortilla chips) when packaged, and I have yet to encounter the annoying hull problem with them. While not exactly cheap, the processing steps needed to convert popcorn kernels into these chips are probably more involved than converting potatoes into crisps, and the markup doesn't feel too horrendous. It's not a bad pantry ingredient, and could serve as a pretty good new carrier of dips. Personally, I like the Popcorners Kettle corn flavor - it's the closest I've come to having on demand kettlecorn flavor.
Posted by Dr. Ricky at 6/27/2013 02:36:00 PM No comments:

Usually, when one thinks of a "fish salad", it's a tuna salad. Meaning canned tuna mixed in with mayo and maybe plopped between two pieces of bread. There's always the use of anchovy in salads like the classic Caesar. But nothing quite tops the Korean dish hoedeopbap, which simply tosses fresh raw fish with vegetables, and a spicy dressing. Refreshing, filling...and low carb.

Update: here's a version of hoedeopbap from Little Korea in Manhattan. 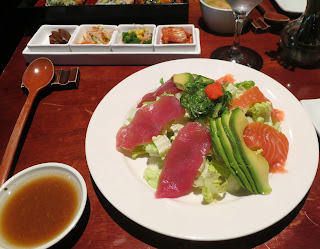 The addition of the avocado was gilding the lily a bit. And it was made more enjoyable with the addition of hot chili paste.
Posted by Dr. Ricky at 6/13/2013 03:15:00 PM No comments: