Those same humble ingredients are the bases for two very different classic European soups. I'll digress a bit to say how impressive the influence of the New World plants were to changes in Old World cuisine. Bearing in mind that the tomato and the chile pepper were relatively late additions to the European pantry, they quickly became essential, and even iconic of the identity. Few can even imagine Italian cooking without tomatoes.

Speaking of Italians, the soup pappa al pomodoro is a delectable way to use up old bread. You heat up some olive oil, and cook down the garlic and tomatoes, season with salt, and throw in the torn up pieces of bread, and some basil. Rustic, hearty, I think it works in any season.

The Spanish, on the other hand, took it a different route to make gazpacho. I don't know where this new interpretation of gazpacho as chunky V8 juice came from, but the classic stuff starts with pureed garlic and bread. Tomatoes are then added, and finally olive oil is drizzled in to make this bread thickened flavorful emulsion. I think that is why is is a cold soup - an emulsion would break when it is heated. A splash of sherry vinegar, and summer heat is controlled.
Posted by Dr. Ricky at 7/30/2010 12:07:00 PM No comments:

I purchased this little beauty from Kegg's Candy factory over on Westpark. Dubbed the "Texas Snail", it features alternating layers of caramel and marshmallow, with a layer of dark chocolate coating the "foot" if it were the real animal. The layering results in quite an interesting contrast in textures, from the fluffy chewiness of the marshmallow, to the sticky layers of caramel and the melting overtones of the chocolate. I found it rather difficult to bite through cleanly, and that is perhaps the design.

Certainly the sticky nature of the candy will not make my dentist happy.

That's a nasturtium plant, which has, incidentally, edible flowers. But someone's enjoying the stem. No doubt from decimating the leaf.
Posted by Dr. Ricky at 7/27/2010 02:03:00 PM No comments:

Email ThisBlogThis!Share to TwitterShare to FacebookShare to Pinterest
Labels: video

Although procured from a bakery, this is not a baked pastry. And I do think it's properly referred to as a pastry. It's a delectable mango mochi stuffed with fresh mango chunks. For the uninitiated, mochi is a dough prepared from by cooking glutinous rice flour in some kind of water based liquid. It forms the basis of a number of prized dishes from Asia; from savory preparations to this pictured snack. Mochi is the Japanese designation, and is generally softer (higher water content) and sweet in application. This is clever masterwork, as the dough stiffens and crystallizes when refrigerated, losing the prized supple nature when warm. And it is notoriously sticky.

One can find mochi wrapped ice cream in supermarkets nowadays, however, this mango mochi not only used mango juice in the dough itself, the payload of fresh fruit is genius. The dusting of coconut provides the proper and subtle textural contrast. Delicious. 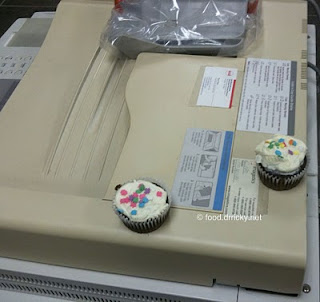 I think Saturday mornings at the HEB supermarket in Gulfgate mall at the intersection of 610 and 45S is a culinary mini vacation. My most recent trip, I spotted someone selling freshly made kettle corn out front. Inside, you are practically in a Mexican mercado, complete with a refresqueria stand selling aguas frescas, a perfect match to the mounting Houston heat. And how many refresquerias let you pay by credit card?

I got a glass of this cucumber pineapple concoction. It's definitely made from fresh pineapple although the sugar obliterated whatever cucumber flavor was in there. Were I hungrier, the flame broiled chicken looked like a more interesting alternative to the ubiquitous supermarket rotisseried bird.
Posted by Dr. Ricky at 7/19/2010 02:20:00 PM No comments:

The CDC announced results that the rate of food borne outbreaks traceable to restaurant salsa and guacamole has more than doubled from the prior decade (current study is based on data from 1998-2008), to the point that 1 out of every 25 reported food outbreaks are salsa and guacamole associated -- sufficient for them to coin the acronym SGA.

Could this be because of an increased popularity of complimentary chips and salsa in the American mainstream? or just sloppiness in the practice?
Posted by Dr. Ricky at 7/12/2010 02:51:00 PM 2 comments:

What kind of Mexican is this?

Carlos Mencia has this schtick which ribs most Americans for not being able to distinguish Spanish-speaking people from Latin America from Mexicans. Or each other for that matter. Of course, despite the commonality of the language, the use of the same word to mean different things in the closely apposed cultures only adds to the confusion when immigrants mix.

Take for example, the cemita. The Mexican cemita is a spicy meat filled sandwich. But in El Salvador, the cemita is a type of cake/bread - it's one of those hybrid situations that makes it a little too sweet for bread, but too sturdy for cake.

Notice the two toned nature of the cake, demonstrating that there are two different batters or doughs in use. Most commonly, a swirl of pineapple preserves is incorporated, although I have read of strawberry or other fruit used. Goes really well with a milky Earl Grey.

Where to get one? This slab was inexpensive at Panaderia Rio Lempa on Gessner.

Spotted this display at a local supermarket (bonus points if you can guess which one), which is of course clearly incorrect. So, the other question is, what are these fruit that are not at ataulfo mangos?
Posted by Dr. Ricky at 7/09/2010 01:26:00 PM No comments:

After being caught in a torrential downpour that had me trapped for hours in flash flooded South Houston, I recently had a hearty late night dinner at Taqueria del Sol. I figured at least the implied sunshine in the name of the restaurant would raise me from the funk. I ordered a bowl of the comforting caldo de res, or, basically beef soup. A good caldo is the product of long simmering of beef bones and other tough animal parts until the collagen dissolves into a flavorful broth. The meat itself is meltingly tender, and the vegetables cooked therein, large chunks of cabbage, chayote, carrots, potatoes, and corn still on the cob add to the healthful and hearty milieu. Served alongside a bit of salty Spanish rice, and hot tortillas, all it needed was a squeeze of fresh lime to complete the comforting anodyne against the dampness.

Then I was struck by the similarity of this dish to a classic French peasant fare: pot a feu. Also derived from simmering beef and vegetables, a pot a feu service is more elaborate, separating out the parts of the cooked broth into courses, and, of course, accompanying it with the more Francotypic bread, butter and wine.

A while back, Robb Walsh wrote about the possible descendant of then pot a feu as a by product of the French occupation of Vietnam, namely, the hearty and interactive soup pho. And so, perhaps what we have here in Houston are a pair of culinary cousins that exist in non-overlapping spheres. And maybe it is high time for some cross pollination.
Posted by Dr. Ricky at 7/06/2010 12:06:00 PM No comments: 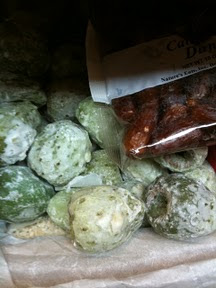 -
The prickly pear cactus or nopal is an emblematic food item to native Mexicans. Much are
written about preparing and cooking the somewhat slimy pads as a vegetable. Of course, the fruit (called
Tuna in the native mexican parlance) is also eaten, although it does share the mucilaginous quality of the pads. One way around it is to candy the fruit, or, as pictured here, crystallized in sugar.
Posted by Dr. Ricky at 7/03/2010 01:52:00 PM No comments: