What is Tuna Spine Jelly? 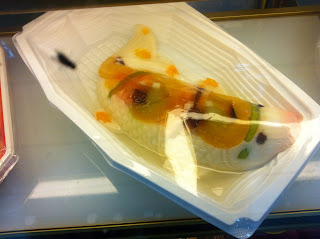 I was recently consulted by Randy Rucker, famed Houston chef, about "tuna marrow". What is this trendy ingredient? Some refer to it as marrow, others think it is either cerebrospinal fluid, or at the very least, the actual spinal cord of the fish - and there's some concern if it was the latter. Most likely, however, everyone is referring to this posting on the Cooking Issues blog, where Dave Arnold first describes harvesting and serving "tuna spine jelly".

Looking at the anatomy of the section (and much kudos to the photography and illustration), the material is neither neural tissue nor marrow - it's mostly the cartilaginous intervertebral disc that separates the bones to enable the backbone to flex. If you've heard of people having a slipped disc - that's the analogous body part in question. Basically, it's like a pillow of fluid between the bony segments, and when compressed on one side, the other side expands to permit the whole structure to bend. 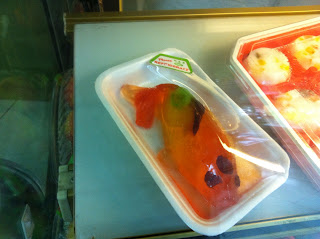 Chemically speaking, it's basically fish gelatin and whatever proteins and salts are in fish blood, minus the cells. That's why it tastes like sea water. But a potential problem may stem from the fact that it's almost impossible to harvest without contamination from the spinal cord itself.

And that may come from prions. The two best known forms of prion diseases come from either neural tissue either from cows ("mad cow disease" in cattle, variant creutzfeldt-jakob disease when transmitted to humans), and other humans ("kuru", transmitted through cannibalism). The term prion was coined by Stanley Pruisner (who was awarded the Nobel prize for this work) to refer to an infectious protein that had no genetic component.

Basically, versions of the prion protein is found throughout the animal kingdom, yet, once in a while, it "misfolds" into a form that causes nearby prion molecules to fold into this new shape, and all of them lock together into big clumps. Note that the prion molecule itself is biochemically identical - the only thing different is how it is folded. And that's how the disease is transmitted; since it's the folding information that is propagated, it can jump species as long as the next organism makes a similar enough protein. Fish to human prion transmission has never been observed, but the possibility is there.

Prion clumping is usually observed in nervous tissue, and only recently are we beginning to understand how eating that can make it past the digestive system to the brain. For one thing, the new folded form is highly resistant to heat (cooking won't prevent transmission), and enzymatic digestion - meaning that it will make it past the digestive system relatively unscathed. How it is then presented to the central nervous system is still not understood, but science continues to research.
Posted by Dr. Ricky at 7/06/2012 03:41:00 PM