Beyond the styrofoam cup

We don't have too many ramen shops in Houston - most of the Japanese restaurants in town are sushi joints. The other items are an after thought. Consequently, for many locals, their image of ramen remains that of the bag of dried noodles to be boiled and swirled with salty flavoring from a packet - the sub $1 starving student meal.

The idea of spending $8 for ramen seems preposterous.

But of course, there's more to ramen than that. Though Japanese in attribution, ramen derives from Chinese noodle soups. The inventor of the instant ramen, Momofuku Ando, died in 2007 after a celebrated life of changing how the world eats this cherished and flexible dish. Likely, David Chang probably named his NY restaurant after the man; after all, the ramen from the Momofuku cookbook involves a 7 hour broth.

Ramen can engender a reverence and a passion for its myriad forms, and its perfect execution. Perhaps nothing better characterizes this online than the blog Rameniac. After all, despite the simple ideas of the dish — alkali noodles, broth, some condiments — people debate greatly about the different ways to a perfect ramen experience.

In Manila, I encountered Ukokkei Ramen Ron, a man obsessed with the perfect ramen dish - to be point of being a "ramen Nazi". The restaurant closes when he feels that the food is no longer worthy of being served, with clear signs that leftovers are not to be taken home. The prime of the dining experience is only to be had there, and that is devotion bordering on fanaticism.
So, how is the ramen? Well, delicious. A deeply flavored broth, toothsome noodles, reverentially prepared and served. And that's the Zen part of eating good ramen - it isn't a simple break and boil thing. It's comforting and elevating at the same time.

By the way, the secret to his ramen broth? He uses black silkie chickens.

Around Southeast Asia, there's a tradition of making sour soups. The Thai have tom yum, there's the Vietnamese canh chua, and of course, the Filipino sinigang. Sour soups are actually a bit of a misnomer, as these dishes can be significantly more substantial than western style soups - one should actually think of them more as thin stews. The components can vary on the main components of the soup (sinigang tends to involve a meat - pork being a personal favorite - or fish component, and an array of vegetables), and the souring agent used (tamarind, unripe guava, kamias, even miso), but they are almost always accompanied by rice.

One ingenious application I encountered flips this formula completely around to make a "dry" sinigang. The broth itself cooked into the rice, and the vegetables are served as tempura around the dish. The flavors, sour and savory, are all there, but texture and composition are completely different.

Just like rice, mangos come in an unappreciated variety. Fresh mangos here in Houston predominantly come from Mexico or Florida, and fall largely into the large Keitt or Ataulfo varieties. Out in Asia, the celebrated mango appears in myriad forms, tart and sweet, soft and firm, to be enjoyed in multiple ways.

If I haven't been clear before on my position, I think the "organic" appellation is meaningless, and does not (should not) signify correlation with food quality. Moreover, the whole brouhaha over transgenics (aka "GMO") is hysteria with no real basis in science.

Ok, that out of the way, let's get into some meaty speculation.

Most of the DNA in human genome doesn't encode information that translates into proteins - the old mind set was that since proteins are main movers and shakers of cellular biochemistry, then most of the human genome is useless, hence, the term "junk DNA". We know now, of course, that there's very little actual junk there. In fact, a huge proportion of the DNA (perhaps most of the human genome) is involved in regulation, small pieces of information that modulate the actions of the main "coding" regions. It's like any big organization; middle management makes up the bulk.
Well, this recent work from China shows that if humans who consume plants encoding one of these regulatory pieces, the plant DNA can modulate the diner's metabolism. This is astounding - it means that items we eat can transmit and modulate information to our own physiology. Conspiracy theorists can therefore have a leg to stand on against transgenics - after all, why would we allow some malicious entity to control our physiology or behavior through our food by encoding it into the DNA of the crop.

But would avoiding transgenics be a panacea? Maybe not.

When regular mice are transplanted with gut bacteria from obese mice, they start developing the propensity to gain weight. Scientists postulated that this is because the gut bacteria act as the gateway to nutrition, allowing more absorption or less depending on the set up. But more recent work indicates that since gut bacteria populations can affect mood and behavior, perhaps these the bacteria were actually modifying the mood of the mice so that they ate more.

Combine these discoveries, that eating "genetic information" is sufficient to transfer it, and that bacteria can be confer behavioral changes without modification, and one can speculate a grand conspiracy where food providers control our predilections and medical conditions.

Rice is arguably the most important cereal crop in the world. It's pervasive, found in all sorts of cuisines from all corners of the globe. It's an immensely versatile ingredient, but in common American parlance, rice is one of those backdrop players in a meal that plays a supporting role. Heck, most recipes don't even describe the available varieties of rice, and how their different properties make for different cooking methods. Using the wrong method or technique on each variety of rice produces less than optimal results. Here in Houston, we're right next to the biggest rice producers in America in Louisiana, yet our Gulf rice cuisine is somewhat narrow in scope.
Middle Eastern and Indian cooking favors the use the starchy, aromatic and long grained basmati rice, which actually holds up fairly well to being cooked like pasta. The fluffy grains are prized when they are nutty and separated. Persian cuisine pays particular attention to the crunchy crust that forms at the bottom of a pot of cooked rice (tahdig).

Rice figures strongly in Japanese, Chinese and Korean cuisines, and prized at least among the Japanese is the short grain meshi. Characterized by a lower linear starch, and higher amylopectin content, this kind of rice isn't as fluffy when cooked, and the grains tend to clump. This means that it can be shaped (as for sushi), or easily manipulated with chopsticks. The ratio of amylopectin to amylose in each grain type affects the optimal cooking method.

The very short grain ("sweet") rice is almost all amylopectin, and cooks up remarkably sticky - hence the term glutinous rice. And I think this lends it to remarkable versatility. But let's establish this from the get-go: there's no gluten in glutinous rice.

This type of rice finds multiple uses in Southeast Asian cooking, and is best when steamed in some way. For example, the Chinese wrap rice mixed with various condiments, meats and seasonings in bamboo or lotus leaves, and steam the whole thing to make zongzi. Varying the leaves chosen to wrap the rice in can make for different flavors and textures, and the technique produces a range of derived dishes both sweet and savory


Rice, of course, makes its way into congee or porridge. Grinding rice in flour, and extruding them into noodles and sheets amplify the number of uses. Understanding the different varieties and matching them to the appropriate technique improves the treatment of this all important grain. 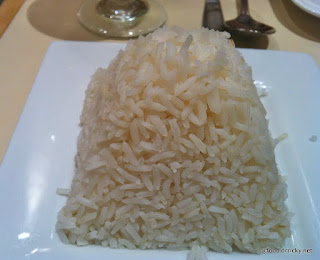 Reduction in biodiversity is an unfortunate consequence of agriculture, modern or otherwise. As more convenient species are selected for, older "heritage" breeds tend to die out. At least in the Slow Food movement, one way to preserve these breeds is to eat them - ie, create a demand, at least enough to sustain a stewardship of the gene pool.

But sometimes, no such avenue exists.

The tawilis is the only freshwater sardine in the world. It is endemic to Lake Taal in the Philippines, a freshwater lake formed from the caldera of an inactive volcano. Aside from the fact that such lakes are geologically short lived, being of such restricted distribution means that this species is due for extinction if anything perturbs this fragile ecosystem. Despite being considered an endangered species, the tawilis continues to be harvested on a commercial scale.

Is it delicious? Yes, unlike other sardines, the tawilis lacks the oily flavor, and is somehow "cleaner" in profile. And it really isn't available elsewhere. For now.

In a sense, having the privilege to eat tawilis is like a summer fling. You just have to enjoy the here and now, knowing the inevitability of the end, savoring each morsel, thankful and sad at the same time.
Posted by Dr. Ricky at 9/12/2011 03:34:00 PM No comments:

The churro. Most people in Texas would recognize it as a humble Mexican cousin to the doughnut, sticks of fried dough covered in cinnamon and sugar, perhaps filled with sweet cajeta. Well, maybe not so humble, when gussied up as Xooro (I can't link to the website - it's a horrid thing with Flash and loud music).

But the ancestry of the churro doesn't actually originate in Mexico - it was brought there by the Spanish. And the Spanish picked it up from the Portuguese.


Unlike the crusty Mexican churro, the Spanish rendition comes unadorned with sugar or cinnamon, and is a much lighter and "eggier" dough. The traditional accompaniment is hot chocolate - unlike the watery spiced Mexican hot chocolate, the Spanish had access to the premium stuff, and thus, drinking chocolate, fortified with cream, thick and luscious, prove to be the perfect dipping companion.

But where did the Portuguese learn the art from? As it turns out - a lot further east. Churros can trace their ancestry all the way to China.

Meet the youtiao, or "oil stick". Popular in China, it's a piece of fried dough that's often served with soup or some soy milk to dip in. Crunchy, chewy, it's amazing hot out the wok. When the Portuguese traded with the Chinese (you know those little egg custard pies at dim sum? Descendants of the Portuguese pasteis de nata.), they wanted to know how to make these breads, but the Chinese didn't share the method with them. So, the extruded churro was an attempt at recreating this dish, and has since then taken on a life, and history, of its own.

And it's still hot in Houston. Find a patio, pour a frosty drink, relax. Of course, that doesn't mean it has to be alcoholic.