One of the virtuous terms being bandied about with it comes to food is "locally sourced", but sticking to this mentality can really hamper the exploration of the world of food. For example, though pears can grow in Texas, pears are definitely not in season in the summer. But in the Southern hemisphere, it would be fall/winter now, and pears are definitely at their peak there. And the varietals than can emerge, be it from genetic drift or controlled selection, need to be sufficiently intriguing to be worth the effort of export.

In my local grocery, I happened upon this New Zealand pear variety called a Velveteen Pear. 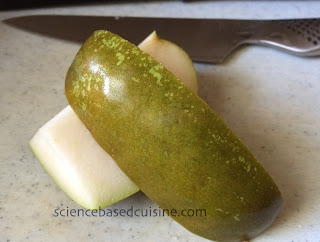 The skin is a little thicker and more textured than the more common Anjou or Comice, which is probably where the velvet monicker is derived. But the flesh is far more intensely sweet than most pears. Unfortunately, I think most consumers fear the unknown, and don't consider this delicious variety. Another one to find if you have the chance is the Abate Fetel pear. A varietal credited to monks in Italy, it is a bit grainier than the usual pear, it is strongly aromatic and flavorful. And quite perishable.

Labeling is a process


A recent bill passed by the US Congress is shaping up to be a major food fight - officially titled “Safe and Accurate Food Labeling Act”, it’s derided as the “Denying Americans the Right to Know” Act by its opponents. And it doesn’t help that the media continue to parrot the line that it’s a bill designed to block labeling:


These are headlines from the more reputable sources, but there are numerous others. In this modern age of transparency - we can verify the account by reading the actual bill itself, nicely archived at the Library of Congress. And from the summary, it clearly writes out:


The FDA must allow, but not require, GMO food to be labeled as GMO.


If the FDA determines that there is a material difference between a GMO food and a comparable non-GMO food, the FDA can specify labeling that informs consumers of the difference.

GMO food labeling advocates should be celebrating - the Federal government has provided them a mechanism to compel the FDA to require GMO labeling. It is a reasonable process that enacts a common standard superseding the patchwork of legislation going through the states. They just have to provide proof of material difference. Ah, but that burden of proof has never been the purview of the antiscience fringe. Take, for example, the recent involvement of Hollywood celebrity Fran Drescher in demanding GMO labeling based on the predictions of her husband, Shiva Ayyadurai that GMO soy has higher levels of formaldehyde. Scientist Kevin Folta has offered an open collaboration, inviting Ayyadurai to be a co investigator in verifying this prediction by actually measuring formaldehyde. Folta has even offered to foot the material costs of the experiments - quite a generous offer - in addition to authorship in the paper. Ayyudarai and Drescher have thus far largely ignored Folta to continue the media flogging.

In the end - I find fault with the media. Our journalists should be held to a higher standard. The bill isn't some kind of obstinate refusal to label - it provides a process, and a standard, to approach the label. And in this case, the government has provided the transparency, but the desire to fabricate a fight is how the actual language gets concealed.
Posted by Dr. Ricky at 7/27/2015 03:18:00 PM No comments: 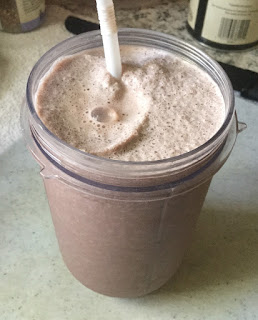 Part of the fame of the restaurant Serendipity 3 in New York City is its iconic Frrrrozen hot chocolate. Decadent, over the top, it seems to be a contradiction in terms. Indeed, the idea of serving chocolate at ice cold temperature is intuitively problematic, as the cocoa butter will become waxy chips that lack that unctuous mouthfeel we associate with good chocolate. As I experimented with doing it at home, turns out the key is to use cheap instant hot chocolate - the kind that has emulsifiers to rapidly disperse the chocolate in hot water - and supplementing it with good chocolate for the flavor. I personally prefer using really good bittersweet chocolate bars, but using good cocoa powder also works, albeit with a smoother consistency. Commercial chocolate chips are often adulterated with different fats for good baking, but I have had problems with them in a cold preparation. The rest is just a matter of blending with ice and milk.

So, the basic procedure: melt the chocolate, if using, in a microwave. Mix in some of the hot chocolate mix, and enough hot water to make a thick liquid, like a chocolate syrup. In the blender, put in the crushed ice, and milk (I use full fat milk, but could experiment with coconut or almond milk, too). Pour in the chocolate syrup and blend immediately. Pour into serving glasses right away, and use a draw to drink from the bottom up. Whipped cream gilds the lily.