What's in a name?

On a recent episode of Top Chef Masters, I hear one of the cheftestants describe the ingredient sea cucumber as "a slug". Which, of course, is patently incorrect. There are such things as sea slugs, which are mollusks, but the sea cucumber is an echinoderm, which makes it a closer relative to the starfish than the clam.

Well, at least she didn't call it a vegetable ( never mind that cucumbers are botanically a fruit). Ingredient names are funny things.

Take for example that the peanut isn't a nut. Nor is a black eyed pea a pea. A geoduck isn't a duck (and the word isn't even pronounced the way it reads). The etymological confusion goes beyond ingredients to actual dishes. Like the way a Welsh rabbit doesn't even have meat in it. Or that an egg cream has neither eggs nor cream in it.
Posted by Dr. Ricky at 5/31/2010 05:03:00 PM 2 comments:

And now, the answers

A few posts ago, I had posted up some pictures of flowering plants and asked as a quiz, what they corresponded to. Well, here are the identities:

What's in a salad?

Salads are often thought to be the perfect summer dish. But what exactly defines a salad? Usually, the image is one of fresh raw vegetables dressed with a light sauce. Of course, as with any classification, lines blur. When I first started work, I ordered a salad plate at our cafeteria, which ended up consisting of a scoop of chicken salad, a scoop of tuna salad, and a scoop of macaroni salad. As I checked out, the lady manning the register looked at lunch, and said,

What is a salad strains the category. Fruit salads often have no dressing. Meat salads can have little by way of vegetation, and be loaded with fat (as the above example describes). There are warm salads (like the brilliant use of hot bacon fat for the dressing), gelled salads (less frequent nowadays) and deconstructed salads where items are set aside for the diner to assemble. Of course, a wedge salad is barely a salad, consisting at it's core a wedge of lettuce covered in dressing.

And then there are things that perhaps could be called salads if we so choose. Ceviche and guacamole count there. Gado-gado, any generic stir fry (Mongolian or otherwise), and perhaps the Filipino halo-halo should count as salads in the spectrum.
Posted by Dr. Ricky at 5/22/2010 08:21:00 AM No comments:

There are a couple of things your should know about tomatoes: never refrigerate them as they turn mealy. And they really are at their best right off the plant.

Salt heightens their flavor, too. Here are some wonderful tiny tomatoes I picked this morning for a snack at work. The coin is there to show the scale. These are wonderfully intensely sweet with that ephemeral ripe tartness that just isn't captured easily. Try it, and you understand why people are obsessed with with growing them. 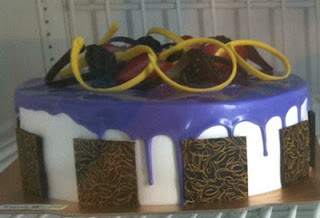 Happy blogoversary to BBQDude and clan, over at Indirect Heat. Onward and hotward (maybe coldwards if we do that antigriddle thing again).
Posted by Dr. Ricky at 5/17/2010 03:39:00 PM 1 comment:

Foie gras of the sea

Ever had monkfish? Go to the average Western seafood counter, and it'll come described as the poor man's lobster. A firm white fleshed fish, when cooked appropriately, will flake into strands resembling cooked lobster. It's also one of the few fish that will hold up to being made into a New England style chowder.

Of course, that's just talking about the filleted fish. Rarely do people see the whole monkfish, as it is an slimy, grayish brown affair, with an enormous mouth. In fact, what is sold as the fillet is just the tail flesh; in Japan, what is prized is the enormous liver that dominates the inner cavity of the fish.

Called ankimo in Japanese, the liver has an unctuous yet marine flavor, and requires some acid and some sweetness to balance it out. It really is a rare treat to try if found fresh.

I had the opportunity to try ankimo at Sushi Sasa (warning, it's one of those Flash only websites - I should join the ranks of food bloggers decrying stupid website design for restaurants) in Denver last night, and they did a stellar job with this unusual ingredient. They claim to fly it it from Tsukiji; I doubt if they'll be catching it fresh from the Rocky Mountains :). They seared rounds of the liver, served it with a creamy wasabi sauce, and micro greens, a few drops of balsamic reduction (not sure if this was necessary) and strawberries - the last being a pretty clever pairing, as the sweetness and the acid of the fruit paired very well with the fish liver.
Posted by Dr. Ricky at 5/16/2010 07:36:00 AM 2 comments:

Because everyone needs a drink eventually 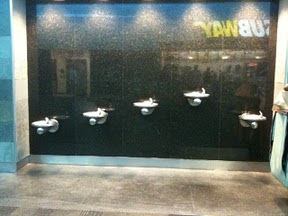 I appreciated the stairstep design of these drinking fountains at the Hobby Airport.
Posted by Dr. Ricky at 5/14/2010 08:19:00 AM No comments:

It's customary in American restaurants to maintain a glass if iced water at the table. The practice is so often considered de rigeur that often tourists in Europe complain about not being able to get ice with their meals. I find, however, that drinking very cold water (and often these glasses are more ice than water - which then necessitates the provision of plastic straws to prevent spillage while drinking) tends to mute one's taste buds. Thus, I prefer un-iced water in restaurants.

And I must give kudos to the Black Bottle restaurant in Seattle for keeping this practice. It's ostensibly a wine bar but serves a tapas style menu of foods. Not all the items are knockouts (for example, they could do better pita bread to accompany the garlicky hummus) but it's fun. And you keep your sense of taste.
Posted by Dr. Ricky at 5/10/2010 09:29:00 AM 2 comments:

So, I didn't get too many responses on the strange exotic Japanese candy I had posted earlier. Certainly none in the actual comment section, although I understand part of it is technological. Anyway, I'll now reveal the secret identity of the sweet...
it's Soy Sauce candy!
And tastes like it, too.
For this week, I'm posting something in anticipation of the summer. As spring winds down, many plants are nearly done with their blooms. But here are some pictures of flowers from plants that yield things that are edible. Care to guess what each flower corresponds to?
Posted by Dr. Ricky at 5/03/2010 04:20:00 PM No comments: