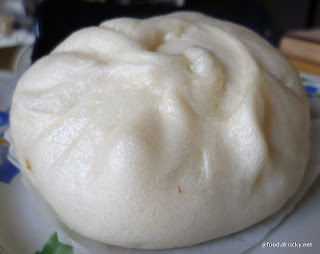 Although it originates from the basic idea of leavening dough, the stuffed steamed bao is not baked, even though they are often procured from bakeries. Bao comes in myriad varieties and forms, stuffed and unstuffed (the latter is referred to as mantou in Chinese), both savory and sweet. The dough itself can be yeast leavened, or chemically leavened (although I think eggs and mechanical leavening are rarely ever done). Unmarked, most bao look like each other, and the stuffing a mystery and a surprise. Common stuffings include Chinese barbecued pork, or bean paste, or custard. Or even soup, as in the giant versions of xiao long bao (the varieties we have here in Houston resemble dumplings more than buns).

The version pictured above? 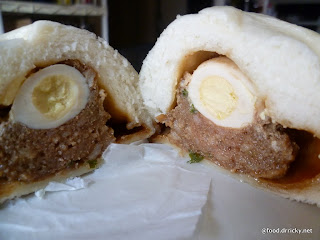 Definitely not worth it

So, on a late night, a group of friends and I stopped off at the Stafford 59 Diner for some drinks (yes, we can socialize as teetotalers). And I spied a huge poster advertising the newest addition to their menu: a Kobe burger. At a diner.

The waitress assured me that it was quite good, and proudly crowed that it came with fries (but all the sandwiches in this diner come with fries...not very good ones). What I got was an overcooked hockey puck that may have been an akaushi beef patty at one point. It was dry, gray, and carried no joy. To add insult to injury, it was a $10 sandwich. As a reference point, Mockingbird, one of the fanciest restaurants in town, offers a Kobe burger for $9.

Perhaps this trend of "Kobe" burgers has jumped the shark. After all, it takes a bit of skill (notably restraint) not to destroy an expensive ingredient.
Posted by Dr. Ricky at 5/24/2011 12:51:00 PM No comments:

"How do you know that name of that?"

The proprietor of Aroma Classique asked me when I requested a rugelach. Billed as a "European Bakery", it is actually quite a full service restaurant, offering salads, soups and full meals. I just smiled demurely, and asked if they had knishes as well - which they didn't at the time. The notable thing about Aroma Classique is that it's a kosher establishment, set up by Israeli owners, right in the thick of Houston's business oriented Greenway area. Just a couple of doors down is the Lebanese Skewers restaurant, and we could have a microcosm of the Middle East here.

Kosher cuisine may seem at odds with the pork and meat heavy stereotype of Texas dining, and perhaps that is where Aroma Classique is trying to strike a novelty value. Among the multiple rules of kosher dining is the strict separation of meat from milk (fish doesn't count as meat - but not all fish are kosher). Restaurants, therefore, come as milk or meat establishments under kosher law. Some vegetarian restaurants can easily be classified as kosher once a rabbi is supervising it.

So, what is rugelach? It's a small pastry, usually made from a very rich dough, wrapped up around a filling before being baked. The rugelach recipes I've seen incorporated cream cheese into the dough itself before being wrapped around dried fruit, nuts, or other items. Aroma Classique's rugelach are wrapped around a chocolate filling, jelly roll style, although I found the pastry itself strangely dry. Looking over the menu, the mystery was solved: the rugelach were parve. That means that they are free of both milk AND meat, so you can eat them in company of either. But without cream or butter, it lacked the luxurious richness I've come to expect from a rugelach. 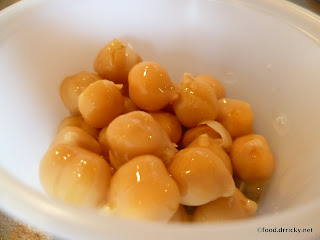 Beans and legumes are among some of the most nutritious of vegetables. Easy to prepare, they also hold up very well to reheating. And, believe it or not, beans do very well in sweet as well as savory applications. Adzuki bean paste is a very popular filling in Asian snacks, and have been used to prepare ice cream and milk shakes. Chickpeas can be candied or ground up and fried to form patties.

But perhaps the most onerous item about using legumes (well, aside from their notorious reputation for promoting flatulence in some people) is the length of time to get them ready. My favorite thing to keep around are lentils. They are quick to cook, be ready in 30 minutes without needing the presoak. All you need is water and salt, but I try to bump up the flavor quotient with the addition of other spices, and can toss in other vegetables or meat.

Cooking tip: you can retard the softening of lentils with the addition of an acid. Therefore, if your lentils have reached the level of doneness but you would like to keep heating them (say, to extract additional flavor from dried herbs or some added sausage), then put in some lemon juice. The firmness of the lentils should stay the same through multiple reheatings.
Posted by Dr. Ricky at 5/18/2011 06:49:00 PM No comments:

A hint of summer

We have no illusions of the giant sauna that Houston turns into in just a few weeks, but we will have ways of coping. Pictured is a faluda from Shiv Sagar, rather sweet to complement a spicy meal, but should be refreshing in the heat.
Posted by Dr. Ricky at 5/16/2011 06:50:00 PM No comments:

The topic of food allergies is one which strikes close to home for me, and I am sure to many others. One of the earliest posts when I started writing this blog centered on food allergies, and how people need to be aware of them. In fact, it's the start of Food Allergy Awareness Week (May 8-14),  and I encourage everyone to go learn about them.

One question that has bugged me for a while, though, is how difficult it is to get restaurants to accommodate food allergies. At the same time, restaurants bend over backwards to have vegan and vegetarian options, openly trumpeting these features. This is strange, as often vegetarianism is a lifestyle choice, but allergies can be a physiological constant. Advertising allergy safety could, in fact, be good for the bottom line, as celebrity chef Ming Tsai discovered. Knowing that one could be safe from cross contamination means that a steady clientele can be nurtured.

I suspect that the issue comes not so much from the act of success, but from the risk of failure. After all, should a vegan dish be accidentally contaminated with butter from a carelessly reused ladle, and the diner could be none the wiser. But cross contaminate with peanuts or seafood with reused tongs, and the mistake could literally be fatal.

Dining together in company is one of the most fundamental bridges to community. Let's try to make it safe for everyone.
Posted by Dr. Ricky at 5/08/2011 01:06:00 PM No comments:


One the traditional Vietnamese soups is the spicy bun bo hue, and usually found amidst the chunky bits are cubes of minerally, dark "tofu". Or, in reality, pork blood. People express an aversion to eating blood. Blood sausage is hard to find in Houston, wish I could find it more. It would pair really well with lentils and the newly emerging summer squashes.
Posted by Dr. Ricky at 5/06/2011 11:38:00 AM No comments:

One thing I hate seeing is the use of chicken breast meat in things like soups. The delicate, low fat meat just overcooks, and turns into this stringy chalky mess. When planning on cooking meats that you plan on portioning out and reheating, the choice of cut is as important as the method used to cook it. In general, cuts that include the bone, be it chicken thighs, or shank or ribs, reheat better. The bone itself serves to provide additional collagen as it reheats. Moreover, these cuts of meat tend to have a little more intramuscular fat and connective tissue, and that promotes flavor, and as the meat reheats and recooks, it actually gets more tender.

Which leads me to the related issue of cooking technique. These cuts of meat tend to be cheaper in part because they take longer to cook. That means that the ideal methods to cook these meats are low moist heat over a long period of time: perfect for the slow cooker. Braising is perhaps the ideal method - the basic technique is to brown the meat, add some flavoring agents, put into the slow cooker with a little bit of flavorful liquid, and let it cook overnight. Then, as you reheat it, things get better.
Posted by Dr. Ricky at 5/04/2011 11:28:00 AM 1 comment:

Sometimes, it's not so much the food but the words that describe it. Take for example, this cooler I spotted in one of the Asian mega markets around town.

And then there are the food item labels. The bizarre MSG food scare myth has all sorts of manufacturers labeling things as MSG-free.
But food labeling can really get out of hand. 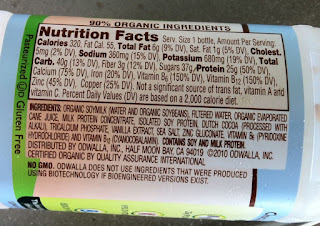 This label from an expensive Odwalla drink is almost comical in its earnest distrust of science while trying to appear high-tech. 90% organic ingredients? What's the remaining 10%? Then again, the very marketing term of "organic" is at best ambiguous, and at worst completely nonsensical. But if you really want nonsensical, read the last sentence - "No GMO: Odwalla does not ingredients that were produced using biotechnology of bioengineered versions exist."