"Have you ever had an avocado smoothie?"

She asked with that pained look in her eyes. "It's so weird." 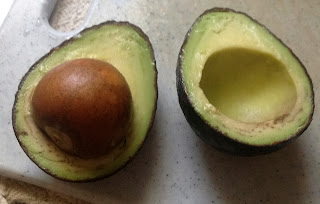 I was speaking with a new acquaintance at a party about food at a Vietnamese restaurant, and avocado smoothies were the thing that she couldn't get to like. I suppose it is that cognitive dissonance of taking something that one assumes is a savory item and making a sweet application with it. Then again, it is a fruit.
I suspect that the main distinction between vegetables and fruit, outside of the botanical classification, is that savory applications are expected of vegetables, and fruit belong on sweet. This divide (in addition to the obvious tax exemption) probably drove the legal classification of tomatoes as vegetables. Nonetheless, tomatoes make great sorbets and other sweet applications.
Many botanical fruits find their way in our vegetable categorization. Squashes are all fruits, and so are most grains (buckwheat isn't even a grass style grain). But what about vegetables as sweet items? You may not think of it, but technically, rhubarb is a vegetable (try it roasted some time). Sweet potato come in many varieties, and the sweet flavor makes them easy as dessert options. And botanically speaking, strawberries and figs are vegetables, too. Though it's hard to avoid eating the fruit along with the vegetable in those.

Ensconced in popular culture is this knee jerk reaction of chemophobia. That's this inherent assignment of a threatening nature to items named with the scientifically accurate chemical names. "Natural foods" advocates dissuade people from eating items with ingredients you "can't pronounce". This reaction is the butt of spoofs like the Dihydrogen Monoxide Research Center. A little interpretation of chemistry can take a lot of the fear out.


Take, for example, my recent purchase of milk. Being normal (that is, not lactase persistent), I purchase lactose-free milk: an amazing product of modern food chemistry. If you recall, lactose is a milk sugar found in almost all milks, and it is broken down by the enzyme lactase. Well, you can just add lactase to milk, and viola, no more lactose.

But the enzyme is not the only ingredient in this carton. Being an enriched milk with calcium (not really sure why they do this), the added calcium is of the form calcium phosphate - basically the same stuff found in bone. But this stuff is only soluble in acid - and you can't add acid to milk without it coagulating (that's how paneer is made, by curdling milk with acid). So, the calcium phosphate is added as a very fine powder which will dissolve into free calcium when it hits the stomach acids.

To keep it in suspension, the milk has to be thicker - that's where carrageenan and guar gum come in. These are hydrocolloids - things that form gels with water. Carrageenan is extracted from seaweed, and guar comes from a bean. Together, these are added in such a low concentration that the milk stays liquid, but is thickened enough to keep things in suspension.

There you have it, nothing too scary about this label. Or even on the other side.

I suspect that the atrocious use of passive voice here is written in fear of pointing out that this inordinate fear of growth hormones in cows contaminates the milk. Because it materially does not. Growth hormone induces an increase in milk yield, but chemical analyses demonstrate that this milk is not significantly different from untreated cows. So the whole "no hormones" schtick is primarily aimed at maintaining an easily manipulated emotional response.
Posted by Dr. Ricky at 5/22/2012 03:40:00 PM No comments:

A number of places, Houston included, have laws that forbid the selling of alcohol on a Sunday. The roots of this legislation of course stems from the Christian practice of making Sunday a day of worship, and that somehow restricting the ability to purchase booze will promote propriety. Which is, of course, unrealistic in the modern age of refrigeration and super mega warehouse clubs where folks can buy more than enough to tide them over a day - it is only an inconvenience to the purveyors.

Unless, of course, you're selling a supplement.

Underberg is readily available in local supermarkets, sold alongside the various import items like spaetzle mix and licorice. It is purported to be an herbal aid to digestion, in single serving bottles of about 20ml. And is 44% alcohol. For those of you uncertain in your chemistry, this stuff is 88 proof. That's higher than vodka.

Of course, classified as a supplement, the "natural" (this term itself is meaningless) stuff can also be marketed with claims of various health effects, without need for basic science backing it up. It's a product that can exist in a number of loopholes both in marketing and availability.

Modern American food media seem to be confused about gluten. There's an explosion of products in the market proudly proclaiming their gluten-free status, from rice "pasta" to cold pills. Indeed, this is a wonderful accommodation of people with celiac disease and diagnosed gluten sensitivities, but it seems to have hooked into the rampant chemophobia. Some speak of gluten like as if it were as toxic as rat poison, but that is hyperbole. Gluten is formed when the indigenous proteins of wheat (and other grains in the Triticum genus) meets water, and produces this elastic network responsible for the spring and chew of pasta and bread.

In Japan, the products seitan and yakifu are really nothing more than just the gluten of flour - the actual starch is washed away - and when cooked with broth, provide a meaty chew for vegetarian diets.

Wheat flour is more of a staple in European and North American cooking, and much of the skill in baking stems from managing the formation of gluten. Take for, example, the prized difference between a Southern biscuit, and a pizza crust.

The iconic Southern biscuit is tender, crumbling, meltingly so, and it derives this from a vigilant interruption of the gluten formation process. Low protein flour, a high fat to water ratio, rapid leavening, and very minimal kneading are employed to this end, and takes technical mastery to do this consistently.


On the other hand, pizza crusts are prized for their crispy and chewy texture, and the processes involved in making it maximize gluten formation. High protein flours, very high hydration, extensive kneading and potentially extended yeast based leavening results in a dough so elastic, you can stretch it to a thin film without breaking. And that's a good thing.

So, can we combine these two extremes? I say yes: behold, the pizza scone.

Note, you can vary this in many different ways. Anchovies, anyone?

Put about 2 cups of regular all purpose flour in a bowl, and sprinkle with salt and pepper, about 1 tsp of baking powder, and whisk until mixed. Cut 5-6 tablespoons of cold butter into small pieces, and cut it into the flour. Can be done with two knives, or a food processor, or a fork. Do so until it resembles coarse meal. Put in some chopped up roasted tomatoes, fresh basil cut into strips, and some chopped up mozzarella cheese, and stir well.

Then add about 1/2 cup of milk or cream, and mix under a fairly dry crumbly dough comes together. Add more liquid as necessary, but mix until it just comes together. Dump it out on a clean hard surface, and press together into a delicate dough ball. Shape into a disk, and cut into 8 segments, and bake in a 180°C oven for about 20 minutes, until lightly browned.

I'm a little suspicious of certain buzzwords on menus. When words like "hormone-free" show up in prominent advertising for a product, it's a direct appeal to the consumer's moral compass as a diversion from the palate. Farm Burger in Decatur, GA, is one of those burger joints that prominently describe their products along these conscientious lines.


I have to give them credit, though. Unlike the contradiction laden practices of Jerry Built Burgers, Farmburger utilizes relatively few throwaway service items - sodas are served on real glassware (free refills on draft root beer is a major plus), and most items are simply served on a sheet of compostable paper. But how was the food?

They had my attention when they agreed to cook the burgers medium rare. And they came out deliciously so, nicely seasoned. No muss, no fuss, just good burgers. It's really a simple bar to hit, but a lot of places can't seem to just do that. A couple of notable sides are bonuses.


All told, I enjoyed the meal at Farmburger, and encourage a visit. I don't think the "hormone-free, locally sourced" buzzword stuff are key to the product, but regardless, they make a good burger.
Posted by Dr. Ricky at 5/10/2012 09:57:00 AM 1 comment:

For Cinco de Mayo, Houston food truck HTown StrEATS is offering something they call "A Feast for the Brave". The idea is to offer items consisting of exotica like alligator, crickets and scorpions. I can understand the need for bravery if the diners had to subdue the animals prior to eating them (well, maybe not the crickets) but I am certain they'll be offered filleted, chopped, cooked, wrapped in a tortilla. And well, dead. From what I can tell, it takes very little courage to bite into that.

Why is there such an emphasis on fear in a lot of dining? The television show Fear Factor regularly challenged the contestants with things like pidan and deer penises, but not really the Russian Roulette risks of casu marzu or amateur fugu cooking. Hell, there's more risk in eating shisito peppers, which have the occasional spicy specimen looking identical to the milder brethren.

For some, the very thought of eating something with a head and eyes still attached is reason to be fearful. Or maybe fermented products like kimchi or bagoong, although, paradoxically, mildly toxic wine and spirits are celebrated. And in fact, some consider it their liquid source of courage. 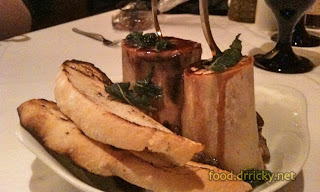 But I think what people consider "fear" is really tapping into the primal expression of disgust. Disgust, as a primal emotion, taps into the reptile brain, and that instinctive drive for evolutionary survival. Indeed, many of the things that disgust us - feces, decay, death - are linked to things that are likely to sicken a consumer. And its a insidious genius of marketing that can link keywords tapping into emotional disgust - slime, for example - to subvert logical discussion with emotional response.
Posted by Dr. Ricky at 5/04/2012 02:39:00 PM No comments:

Some foods have Iconic shapes or colors commemorating history or cultural identity. Perhaps the best known example is the croissant, invented in Vienna to commemorate the victory of the Christians over the Turks (brutal as that may sound in modern times). The colors of the ingredients in chiles en nogada echo the colors of the Mexican flag.

How about one for a sporting event? 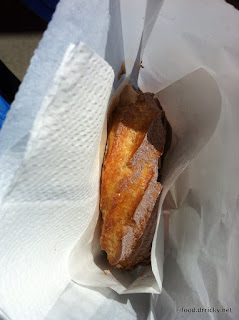 The Paris brest was created to commemorate the Paris-Brest-Paris bicycle race (no, not the Tour de France, although I wouldn't be surprised if it is used so now). It is a wheel shaped (well, toroid or donut shaped) pastry, made from choux, and filled with a praline cream.

I've never encountered this in Houston. The example illustrated here is an expansion of the product line of Japanese curated masters of choux, Beard Papa Cream Puff bakery in Los Angeles.