When we say chocolate, the common thought is that it is a sweet of some sort, like those ubiquitous chocolate chips or bars. Those are fairly recent, though - initially, chocolate was a drink. Well, a better drink than what most places in America think of as hot chocolate. That milky, overly sweet concoction that is provided as a patronizing nod to children while the "adults" have (bad) coffee is a tragic waste of the potential of chocolate.

That delicious chocolate bar is a complex emulsion of fat and crystals - some of that unctuousness can be conveyed by making sipping chocolates (rather than hot cocoa). The key is to use whole milk, or even half and half, and not to heat it too much as to cause the emulsion to break. And great restraint on the sugar - the complexity of flavors in chocolate can be overpowered easily. Sip slowly in the company of friends.

The source of chocolate is the cacao plant, Theobroma cacao. The name literally translates to "food of the gods", and in its mesoamerican origins, chocolate was very much a drink for the gods. In Oaxaca, Mexico, hot drinking chocolate is prized even above coffee. Traditionally, it's made with water, not milk, and without the cloying milk fat, this style reveals more of the nuance on chocolate flavor. A foam atop the hot chocolate is great prized, as it has to manually beaten into a drink with relatively few foaming components.

But there's a lesser known sibling to chocolate, a different product of the cacao bean: tejate.
Perhaps the ancestral energy drink, it is purchased as a pick me up the middle of the day, drunk out of  colorful gourd cups. The white layer atop the giant bowl is pretty much cocoa butter, released by the slow massaging of the ground cacao with masa and various ingredients. A tejatera (tejate is almost exclusively made by women) will scoop out the liquid and separately top it with the fluffy white mass.
Sweetening the drink is optional. The flavor is floral, chocolatey, light. Tejate is refreshing respite on a hot day, but preparing it is a laborious and manual process (with a surprisingly large number of ingredients.

At least five people forwarded me an article on Gawker, penned by Yvette d'Entremont (aka ScienceBabe), dressing down the profiteering fear mongering by Vani Hari (self promoted "Food Babe" - no, I will not send her any additional traffic). At least two have plainly asked me if I helped write it. I assure you, I had nothing to do with it, though I sympathize with the sentiment. Hari has since posted a response chock full of ad hominem and evasion, and the media blogosphere as taken to reporting this as a type of blogger vs blogger fight. Just portraying it as any sort of "debate" lends false equivalence to to both authors, when in fact science is squarely represented by d'Entremont.

In Orac's blog, Respectful Insolence, he alludes to the entertaining nature of the virtual dressing down Vani Hari is getting straight in the title. Aside from recapping Hari's numerous historical demonstrations of scientific ignorance, and accompanying arrogance against being educated, he did point out a small tactic she uses: citing a scientific study based on peripheral relevance, and overinterpreting this proof of validity. In this case, she pulls out some preliminary cell culture papers to imbue kale with exaggerated cancer protective properties. This underhanded tactic cloaks an outlandish claim with unearned veracity, but Hari isn't alone in doing so.


Over interpreting science articles are common stock in "scienciness" articles in mainstream media.  Extrapolating from a few observations, one can paint up speculations of miracle cures or doomsday scenarios, even as the actual scientists publishing responsibly note restraint in interpretation. Last November, I noted that respected science journalist Maryn McKenna used such tenuous justification in linking "antibiotic-free" turkeys (if they even exist) to the rise of antibiotic resistance in human pathogens. Hari is certainly a relatively easy fraud to spot given her loud and obvious trumpeting, but we should hold our other popular communicators responsible, particularly if they potentially profit from creating fear. 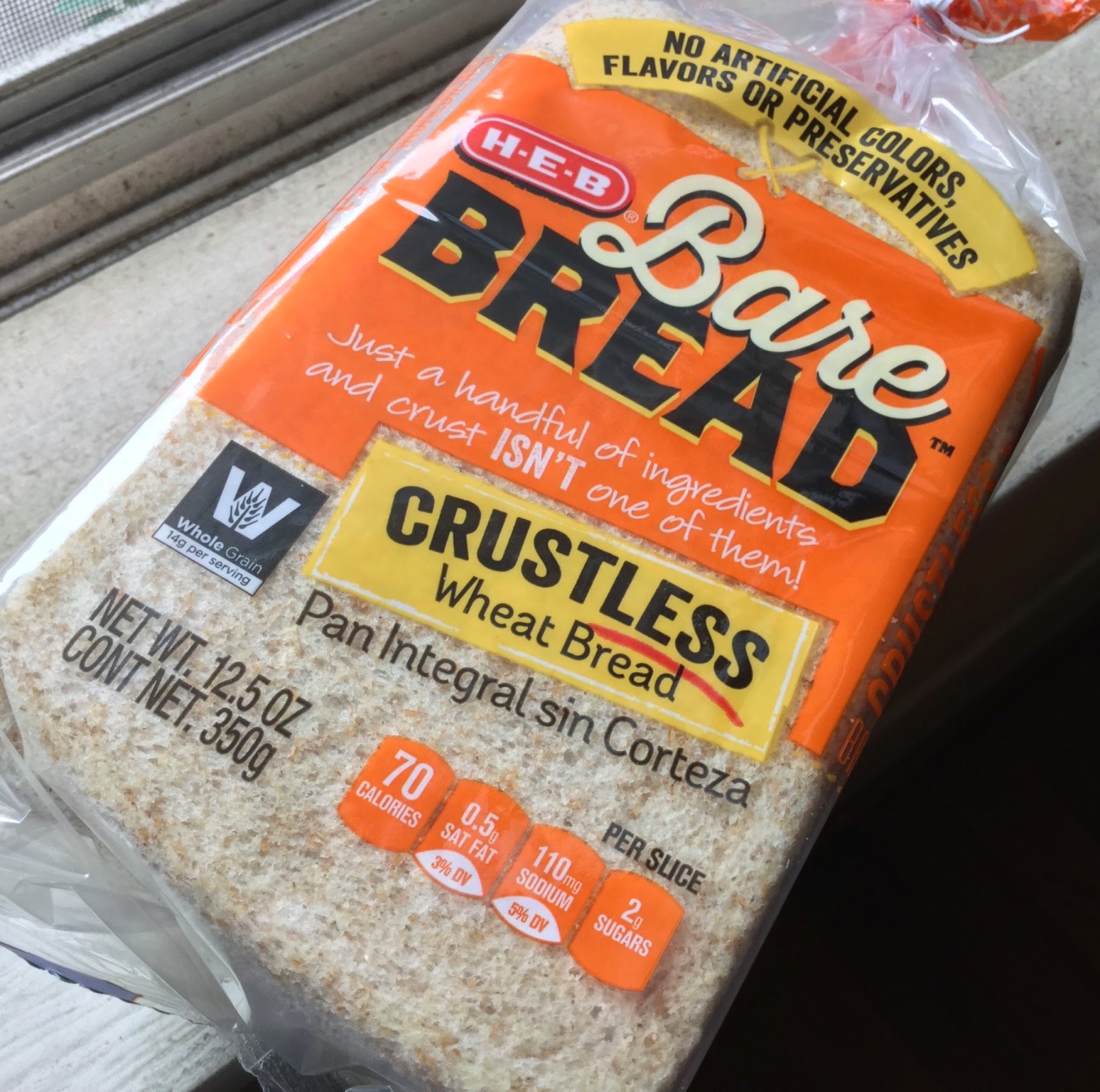 In a recent trip to the market, I encountered perhaps the most outrageous bread product I've ever seen. It's crustless industrial bread. I realized that this thing is a wonder of technology. For one thing, given the vapid sponginess of this type of supermarket bread, the crust is the only textural contrast it has. While I'd like to rail against the act of cutting off the crust, I have to admit that this isn't exactly good bread crust. Maybe that is the source of why so many Americans regard crust retention on sandwich bread as distasteful. 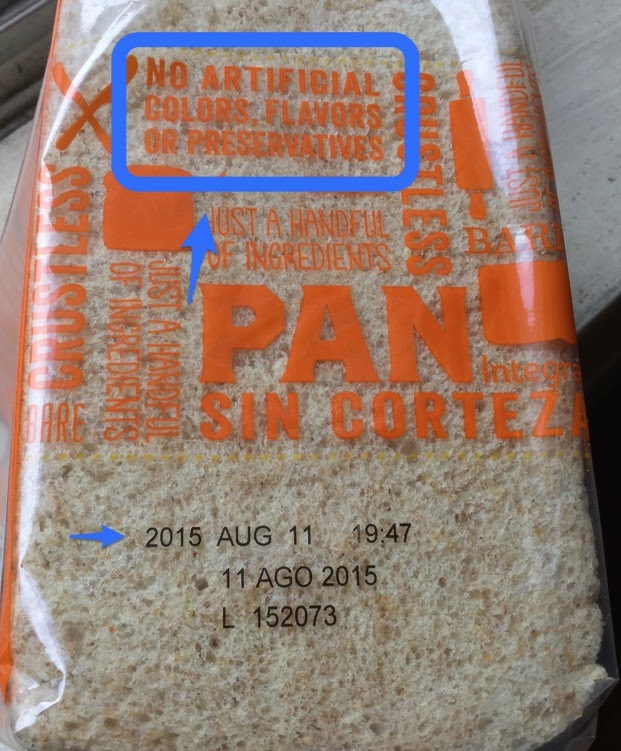 Reading the label though reveals how far along our technology has come when it comes to industrial bread. Note that there are no preservatives used, yet the bagged bread, naked and soft, is rated to last five months. Simply incredible. I can only guess that it must be due to the technique of packaging. 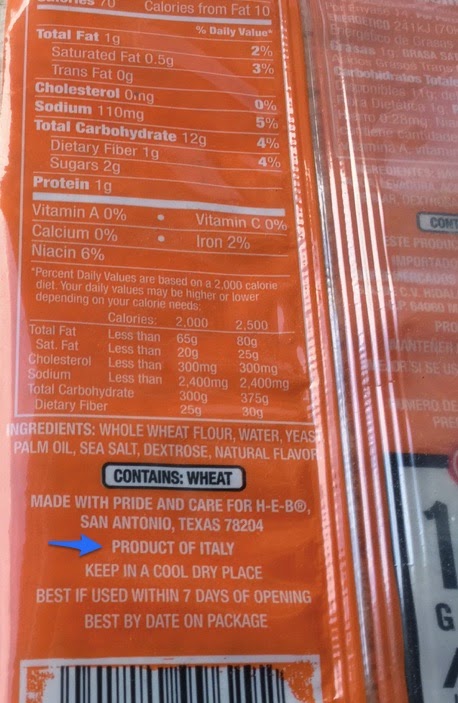 And that is indeed the case, as spoilage apparently commences when the bag is opened. But here we find another impressive fact: this is imported Italian bread. Unlike any other Italian bread I've ever encountered. The combination of good preservation has made it feasible to actually manufacture crustless bread in Italy to sell in Texas. For all the quasi-Luddite homage to tradition food culture engenders, this is quite a feat of technological advancement.