Feed yourself for a year

for only $800
http://www.costco.com/Browse/Product.aspx?Prodid=11487214
Uh, problem is, would you really want to? Kudos for including the wheat grinder. But boo for false advertising - the description lists meat among the items offered, but when you peruse the fine print, it's textured vegetable protein - fake meat. Mmm...bacon TVP...not.
Posted by Dr. Ricky at 9/29/2009 04:21:00 PM No comments:

It's so pretty it's delicious

Congratulations to BBQ Dude, over at Indirect Heat. He may not have gotten the grand prize in Michael Ruhlman's Make a BLT from Scratch Challenge (come on, the winner harvested his own salt from the ocean!), but he did get an honorable mention for the photography of his homemade BLT. Well done!
Posted by Dr. Ricky at 9/28/2009 12:43:00 PM 2 comments:

From feast to fast

I had a great lunch today in the company of some of Houston's nicest food luminaries and bloggers (and friends) at Godo's, to continue my current crusade to educate locals about Filipino cuisine. We at at Godo's, which is a Filipino restaurant/bakery/grocery store/community center/remittance zone (yes, FSM bless the immigrant entrepreneur), where we sampled the small but capable buffet steam table, and some additional goodies besides. Lechon kawali was a big hit - the name refers to lechon (roast pig) done in a wok (kawali). What it is is pork belly, simmered in vinegar and spices, and then deep fried, then chopped into unctuous and crispy cubes.
But of course, I had to bring up a shock value dish: day old chicken. I doubt if this will ever be served here in Houston :). Basically, when one is raising chickens, roosters are less valuable than hens. Unfortunately, with every batch of eggs, they will yield 50% roosters. Yet there is no way to sex a chick until it is hatched; not wanting to waste food on unwanted roosters, male chicks are usually immediately dispatched shortly after hatching.
Jay Francis tells me that here in America, those day old male chicks are ground into cat food (I contend that they may be mixed with meat glue and turned into McNuggets). In the Philippines, the chick is battered, deep fried, and served on a stick with beer.
I won't go much further into describing food, as we are approaching the start of Yom Kippur, the Jewish holiday of atonement, which dictates fasting for the observant. No need to tempt :).
Posted by Dr. Ricky at 9/25/2009 03:00:00 PM No comments:

One of the comments I received about my (admittedly somewhat wryly bemoaning) blog post yesterday was that "other Filipinos" admit that Filipino food isn't that good anyway. Probably meant to stir up the pot a little, that's a dismissal smacking of ignorance and handwaving. Certainly, the outright dismissal of any regional cuisine is suspect, given the evolution of cooking styles along with the history, culture, and biodiversity of the people involved. Although Filipino restaurants seems to be under the attention of the Houston cuisinistas, use of Filipino dishes and styles have not gone unnoticed. For example, one of the early platitudes to Bryan Caswell's Reef is his high-end kinilaw (in this article, called the Filipino ceviche). [sidenote: kinilaw is really a verb - all sorts of things can be made into kinilaw. Imagine going into a restaurant and ordering "grilled". Grilled what? ]
When asked about Filipino cuisine, the food of a nation spread on an archipelago with thousands of islands, dominated by centuries of European and American incursions, and traded with Southeast Asian neighbors cannot be described in a few iconic dishes. The sheer diversity rivals that of Malaysian, Indonesian and Singaporean cookery. For discussion, I like bringing up things for shock value: the balut, an embryonated duck egg, or azucena, dog meat stew. But the many regions and islands of the Philippines bring their own dishes. Americanized Filipino food is also emerging, as are foods that are influenced by the modern influx of processed conveniences (using a powder or a mix for making sinigang is very common nowadays).
The Filipino lumpia has more in common with the Hokkien popiah than the usual Chinese (Cantonese) spring roll. It uses the same very thin crepe as a wrapper quite unlike the doughy wrappers used for spring rolls. Of course, the Filipino twist is the turon - which takes it's name from the Spanish candy of wrapped nougat, but there is practically no resemblance. Turon takes saba plantains (I think I sometimes found here as burro plantains), wraps them into the crepes with slivers of jackfruit, and deep fries them in the presence of brown sugar so that hot caramel studs the crispy wraps.
Posted by Dr. Ricky at 9/24/2009 04:29:00 PM 1 comment:

Just before my recent trip out to visit friends, I picked up some freshly made bibingka at a bakery not far from where I work. Bibingka is a type of cake adapted to Filipino tastes, baked in a charred banana leaf shell, and I realize that we have a sizeable Filipino population here. The presence of the largest medical center in the world may have something to do with it. Yet, in the recently released Fearless Critic Guide to Houston dining (link on the sidebar), not one Filipino restaurant makes the cut to the 450 reviews in the book.

To make my point, the Houston Press just announced their Best Of Houston awards, which, of course, included restaurants. There were categories for Best Tex-Mex, Best Burger, Best Vietnamese, etc. Of which there are numerous samples in the city. There was no category for Best Filipino.

The last restaurant listed under the Spanish category is Tony's Grill in Stafford. Which is actually a Filipino restaurant with a chef that had worked in Spain.
Posted by Dr. Ricky at 9/23/2009 03:59:00 PM 2 comments:

I have a couple of problems about following recipes: first is the regimented requirement of all the ingredients, even though in many cases some flexibility is allowed. And secondly, recipes fail to capture the fundamental techniques that make for great cooking. That is why, armed with the same recipe, two people can produce radically different dishes (except, maybe, for some baking). Moreover, some dishes aren't amenable to being captured in a recipe description. For example - the basic French omelette or a really good teh tarik. But once in a while, you can distill the fundamentals out of a series of recipes as examples.

Like the stew. Which is fundamentally the same idea as many meat curries or braises - the idea of serving some kind of meat or protein cooked in a flavorful and savory sauce. The basic idea is to start with a large heavy pot with some oil, browning the meat of choice in the oil and creating a fond (that is, enhancing the Maillard reaction to caramelize proteins). Remove the meat (and excess oil), and cook down some aromatics. If making an Indian style curry, that means putting in dry spices to build a masala, but in its simplest form, some onions and garlic will do. Then some aqueous liquid is added when the aromatics have cooked to form, to dissolve the fond, and the create the sauce base. European cooking tends to favor using wine, and often stock or broth is used. I favor the use of crushed tomatoes, or coconut milk, or even water (sometimes with some ground dried mushrooms in it). Stir vigorously, allow to cook a bit before returning the meat to the pot. Various vegetables can also be added, or dumplings.

Subsequent simmering will produce the final dish. Salting and the addition of acid can then adjust the flavor a bit.

This same basic technique can apply to almost any wide range of meats, from snails to oxtail, and forms the basis of dishes from adobo to tagines.
Posted by Dr. Ricky at 9/22/2009 06:10:00 PM 1 comment: 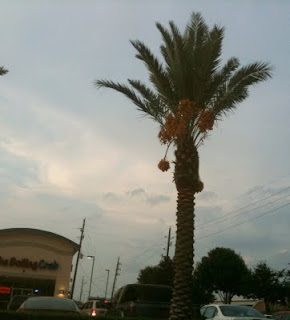 I noticed these date palms heavy with fruit along the parking lot of
The Boiling Crab. I wonder if the lot owners realize that those things
are edible?
Posted by Dr. Ricky at 9/20/2009 10:06:00 PM No comments:

L'Shana Tova and the Final Iftar

This weekend marks the coincidence of two major holidays: the end of Ramadan (Eid al-Fitr), which is the month long fast of observant Muslims, and Rosh Hoshanah, the beginning of the Jewish New Year (incidentally, Happy 5770 - so much for Y2K). Oddly enough, I haven't heard of too many traditional foods for Eid al-Fitr, many simply falling on the regular celebratory foods for regional Muslims. The local article on Eid al-Fitr actually recommends taking Muslim friends out for Mexican food as they are probably tired of the same food from iftars. For Rosh Hoshanah, celebrations prescribe the use of challah, honey, apples, figs, and fish. Those ingredients would make some interesting dishes - I may have to make something out of that.
And serve it with a side of bacon :).
Posted by Dr. Ricky at 9/18/2009 01:44:00 PM No comments:

Email ThisBlogThis!Share to TwitterShare to FacebookShare to Pinterest
Labels: holidays

It could be a weed 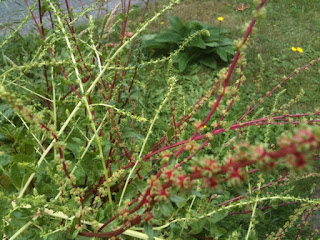 I spotted this in Washington. Believe it or not, that is Swiss chard
gone wild. That appears to be the effects of a plant hormone
giberellic acid, probably due to the presence of a fungus that
overproduced the hormone. I didn't cook it but I'll admit I was tempted.
Posted by Dr. Ricky at 9/17/2009 09:22:00 AM No comments:

Mooncakes are the traditional item for the upcoming Mid-Autumn Festival. Over at Masak-masak, there's a photo essay on these beautiful mooncakes that we don't get to see on this neck of the woods.
Posted by Dr. Ricky at 9/16/2009 01:42:00 PM No comments: 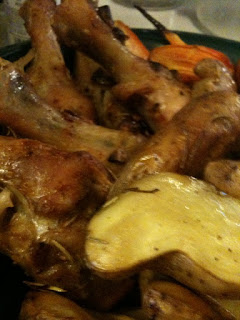 Where I roasted some chicken legs atop a layer of halved fingerling
potatoes. The chicken drippings basted the potatoes, resulting in a
nice crispy texture and savory flavor. Admittedly a little underseasoned though.

Email ThisBlogThis!Share to TwitterShare to FacebookShare to Pinterest
Labels: coo

A number of years ago, some folks in Japan started marketing cubical watermelons. The French have liquor with a pear grown in the bottle, which is now actually rather common
But China now makes Buddha shaped pears.
Om.
Posted by Dr. Ricky at 9/11/2009 01:48:00 PM No comments:

It may be a cartoon 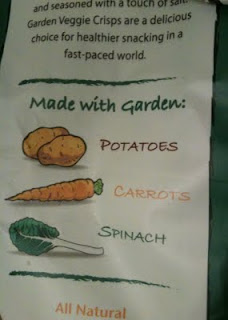 But that surely isn't spinach. One of the bok choys perhaps. I'm
considering submitting this to failblog but it may be too subtle.
From a bag of Veggie Crisps.
Posted by Dr. Ricky at 9/10/2009 10:56:00 AM No comments: 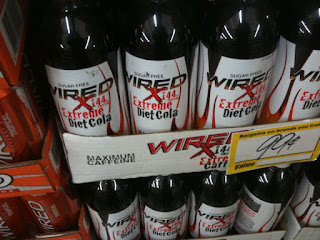 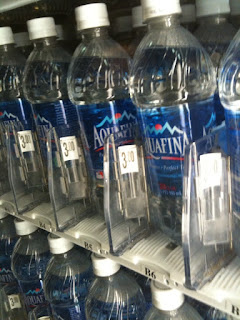 With the stringent ban against liquids being brought into airports,
enterprising opportunists are charging exhorbitant prices for
bottled water.
Posted by Dr. Ricky at 9/03/2009 03:20:00 AM No comments: