No secret that the Japanese have a wonderful obsession with snacking. Actually, relative to the monolithic meal model of Americans, much of the rest of the world "snacks" all day. I'm not going to argue the health benefits of that, but the smaller meals also results in a diversity that can be mind boggling. One blog in particular, Japanese Snack Reviews, does just that: reviews a different Japanese snack each post. It's wondrously entertaining, and I encounter things like Mango Chocolate. Of course, on my recent layover in Japan, I had to see what was available. 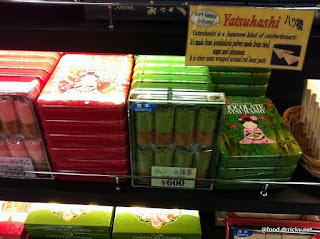 I have no small love for the Nestle product Milo, that's no secret. And I'm not alone - Milo enthusiasts abound around the world. Granted, inferior copycat products also exist and have somehow garner fans (forgive them, they know not what they abide), but creative uses for Milo emerged out of Singapore and Malaysia. For example, the Milo Dinosaur (with a nostalgic hat tip to @foongfest).

I'm not really sure where the name comes from, but it's shaken Milo beverage poured over ice, and a generous helping of powdered Milo on top. It's a mess to eat/drink, but delicious.

But why stop with the drink. A piece of thick cut bread, toasted, buttered, and generously sprinkled with Milo. It's a meal. And dessert. Which is a concept acceptable in Southeast Asia.

The Filipino dish halo-halo is often described as a dessert, although it is really quite filling in many incarnations. It's a member of a family of ice-based dishes found throughout Asia, from Korea's patbingsu, to the Taiwanese shaved ice bowls. The name literally translates to "mix-mix", which is both an admonition on how one is supposed to eat it, as well as a description of what the dish is. A number of sweetened items, from beans, to yam, to ice cream, are piled together with crushed ice and milk. Mix it up, and enjoy.

But food evolves. While many halo-halo preparations boast of a large variety of ingredients in a glass, one shop in Manila specializes in what could be an early ancestor to the modern halo-halo. This version only has three ingredients outside of the ice and milk: flan, sweetened bananas, and hominy. But much care is taken in the shaving of the ice, such that it yields more easily to the mixing spoon. And with relatively few ingredients, the care taken in its construction is more evident in the less muddied flavors. It is perhaps akin to the difference between a classic Neapolitan pizza margherita and the Americanized superloaded delivery pizza.

Houston is having a record heat wave. Or a heat blanket. Coupled with a drought, it's just hot out there. Somehow, an ice cream just seems too thick for this weather. One option to be had are these shaved ice milks increasing in popularity in Chinatown. Frozen flavored milk is shaved into these sheets that melt on the tongue, providing both the the cool comfort of snow, but lacking the cloying coating from cream. 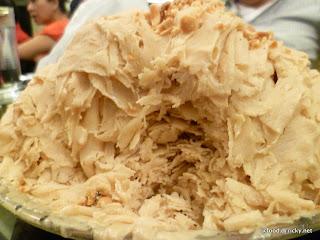 
We've reviewed the incarnation of pork belly as gua bao. Until recently, the main American applications for pork belly are bacon, and as a way of hedging against volatile pork prices. Despite being a low priced meat, it is finding its way into high end applications. Though our local chefs find a way to dress up this formerly plebian meat in sous vide airs, elsewhere cooking belly sits on a long history of tradition. Behold, high end belly:


Of course, the unctuous luxury of belly doesn't have to end with the pork. Let's pair it with some raw tuna...belly.


Japanese filets of tuna grade them by their distance from the belly. The farthest away is maguro, common tuna - it's that brick red slab that most people are accustomed to. A little closer is chutoro maguro, and right at the belly, is ohtoro maguro - the flesh so marbled with fat it is a pale pink in color, and melts like butter on the tongue.
The two piece serving above (well, the other one was eaten quickly) cost 1000 yen - about $14. For two bites of fish. It's a zen experience - you simply chew on it, and marvel at a rare taste experience.
Posted by Dr. Ricky at 8/22/2011 11:31:00 AM No comments:

Gua bao all around

I will not be blamed. I'll take credit.

In counting down her mandated list of 100 Favorite dishes for the Houston Press Eating Our Words blog, Katharine Shilcutt places the gua bao from Yummy Kitchen  at #37, and she was kind enough to credit me. Do I like gua bao? Yes, indeed, when it's done right. I've surveyed quite a few. The (in)famous pork belly buns from Momofuku actually try to blur the definition between gua bao and Peking duck (which isn't too far of a stretch, as some places serve the same soft buns with Peking duck, rather than the laborious crepes).

Now I referred her to Yummy Kitchen not without some experience testing a few other places out. For example, the newly opened Kiki Cafe also offers gua bao on their menu, and it is literally a block a way (granted, a Houston city block is a bit larger than a New York one). I got to test that out with Twitter friend @ziggysmogdust.

The conclusion was unanimous: these were anemic shadows of a gua bao's promise. One look at the flat and listless bun is all you need to know.

This verson from Bellagio sports a beautifully fluffy bun, carefully stewed meat, fresh scallions, and chile oil. But all the delicacy does not jive - there's something casual and comforting about the gua bao experience, and it doesn't seem to sit comfortably amidst fine airs. To me, it's a phone call from an old friend, which is why my favorite restaurant gua bao is a humble one from the past.

Ha-Yuan is an old chain of restaurants form immigrant Chinese in Manila, and they turn out a good gua bao. It isn't fancy, and it's just right. Too bad it's far away - meanwhile, Yummy Kitchen here in town does a pretty good facsimile.

Global commerce has changed the culinary view of the world. Here in Houston, we readily avail of produce from Chile, or avail of Indian spices, while Washington apples and Campbell's condensed soups ("America's bechamel") are readily available in Southeast Asia. However, there are still many things that do not travel well, or perhaps only recognized as a delicacy in a certain region. Take this little item I picked out from a conveyor belt sushi restaurant in the Nagoya airport in Japan.

What looks like a blob of amorphous white mass is hamo, or conger eel. And we don't see this fish served often, if at all, in the US is the labor intensive method of preparation required. Hamo is notoriously bony, with a plethora of thin bones throughout the flesh. Thus, good sushi chefs employ a bone cutting technique - the filets have to be partially sliced in uniform millimeter distances, cutting the small bones into edible fragments. It's then simmered, which "blooms" the fish, before being finished with a blow torch (which are the char marks). The flavor is mild for an eel, specially if one is accustomed to the heavily sauced kabayaki unagi most think of when having eel in the US, but the texture is unique. The small bone fragments are definitely perceptible to the tongue, and with appreciation of the precision required, leaves one to quietly contemplate the work of an artist.
Posted by Dr. Ricky at 8/17/2011 12:17:00 PM 1 comment:

On a recent trip, I was unfortunately delayed in a layover in Japan. The airline billeted the passengers in the nearby hotel (Toyoko Inn) obviously designed for travelers - sort of like an airport Holiday Inn Express, which also, conveniently served free breakfast. And for those of us who have traveled often, you know what those free breakfasts are usually like - microwaved items, hot coffee, some doughnuts, you're ready to go. But Japan is a different place from our American sensibilities.

Once in a while, it's good to be enlightened.
For many, the application of modernist cooking techniques (nee molecular gastronomy) appear to be laborious and expensive ways of capturing familiar flavors. In short, there are easier ways of accomplishing the same thing. Only in the hands of a true artist with a deep understanding of food science can it come together in a dining experience that is novel - and delicious. And that's what I discovered in a recent visit to Atlanta's Flipburger Boutique, helmed by Top Chef winner Richard Blais. 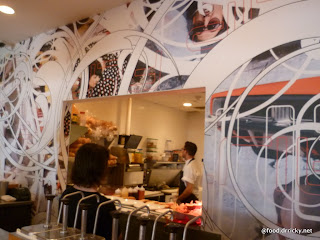 First, a comment on the sandwiches themselves: the burgers are a modest 5.5 ounces, not the half pound monsters people in Houston seek out. That said, we thought they were perfectly portioned - enough to be sate the appetite, but not so full as to have room for the other things on the menu. Moreover, the bread was beautifully matched to the filling, not only in dimensions, but in texture and flavor. Icing on the cake: the prices were reasonable, if not downright cheap for food of this quality (and gimmicky).

Perhaps the most touristy thing is every molecular gastronomist's signature pink elephant: a giant container of liquid nitrogen in the corner of the room. And Flipburger uses it in making liquid nitrogen milkshakes. Now making liquid nitrogen ice cream is pretty de rigeur - a lot of vapor and sizzling results in a good show, but really, not very practical. And the resulting ice cream is really only marginally different from standard ice cream. However, the flavors and actual milkshake base that Flipburger uses are top notch.