I've been trying to wrap my head around the experience of dining at Jerry Built Burgers (JBB). Like many new places, JBB attempts to appeal to the conscience of the diner well before the taste buds. A read through of the website describes a bit of the dining philosophy:

...organic when possible, local when available and always fresh. Committed to sustainability, we source seasonal ingredients from local and regional farmers during each harvest.


Sustainability. What does that mean? In its strictest sense, it means the ability to endure. And sustainable dining, as a practice, promotes stewardship of the environment so that we, as a species, can endure. Very often, it speaks to seasonal harvesting, and maximizing our benefits from farming while minimizing waste. What, exactly, does JBB do in its commitment to sustainability?


Places like Dartmouth promote sustainable dining by resorting to compostable and no-waste food containers, and modifying menus to adjust to the availability of produce as they change with the seasons. JBB freely and frequently uses lots of disposable and noncompostable material in their food containers (did you see the newfangled dippy ketchup containers? And the unnecessary plastic collar around the milkshake glass?), and a unchanging menu that is the epitome of anti-seasonality. Unless lots of transport is involved, in which case makes it very much anti-local.


How does the food taste, though? The burger itself was acceptable, not terrible but not terrific. And the metallic taste of canned chocolate syrup married with a gritty pre-scooped and refrozen ice cream made for a less than terrific milkshake. But given the emphasis of the advertising, I don't think it's the food quality that is the main focus anyway. And on the latter count, it fails the logic.
Posted by Dr. Ricky at 4/26/2012 04:55:00 PM No comments:

Recently, I sat in a panel discussion about the future of agriculture, particularly in the application of transgenics. An audience member inquired how commercial biotech seed providers manage to prevent farmers from simply replanting part of their crops, "forcing" them to buy new seed every year. While "kill genes" have been speculated to be part of the technology, actually, simple genetics takes care of that. 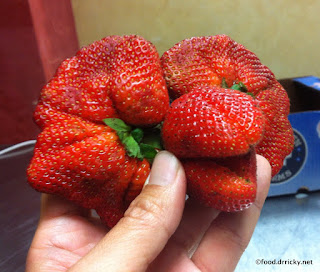 Most of the high performing crops come from hybrid seed - that means that two very different parental lines are crossed to make seeds that have genetic material from both parents. In some cases, the hybrid exhibits hybrid vigor - desired qualities superior to either parent; maybe taller stalks, easier to dislodge fruit, or simply higher production. The hybrids, called an F1 cross in genetic parlance, make a relatively uniform population, with predictable production characteristics. But if it is crossed with itself (i.e., replanting the seed), the next generation will start segregating the genes, such that the original parental traits start emerging.

The uniformity of hybrid vigor is thus lost, as well as the predictability of the F1 generation. One could invest multiple generations recapturing the original parental lines to cross and make hybrid seed again - or just buy it ready made from the seed supplier. This is a property known of genetics since the time of Mendel, no fancy tricks or special tech required.

But hybridization can also be maintained in a different way.

"How do you grow seedless watermelons?"

Originally intended as a joke at a party, watermelons and other plants can be hybridized to exploit the triploidy phenomenon seen in bananas - resulting in F1 progeny that are not only superior in flavor and production, but also unable to produce fertile seed.
Posted by Dr. Ricky at 4/24/2012 03:43:00 PM No comments:

Citrus of an unusual sort

Despite the abundance of citrus that grows in Texas, the actual variety of leaves something to be desired. Or at least the ones that make it to market. Going through the Santa Monica Farmers' Market in Los Angels, I encountered some rather unusual citrus varieties that we don't typically find in commercial settings. 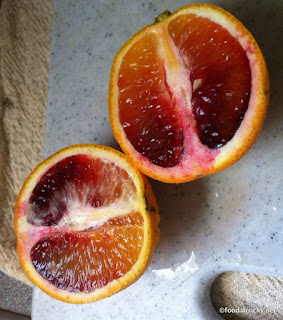 The blood orange is so named due to a mutation that overproduced anthocyanins (the same stuff that makes beets red) in the citrus. Some claim a more tart flavor to the fruit, but what is most striking is the deep red color that makes it looks like the fruit is bleeding. Fortunately, anthocyanins are easily washed away with water. 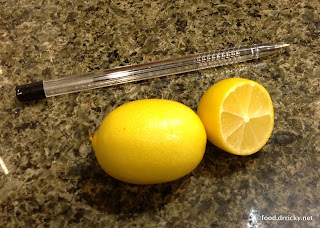 The limequat is allegedly a cross between a lime and a kumquat. Like many first generation hybrids, the limequat is seedless. It has a very tart flavor profile, distinct from either limes or lemons. The pen is there to provide a sense of scale to the size of the fruit. 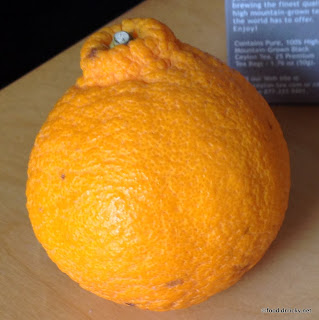 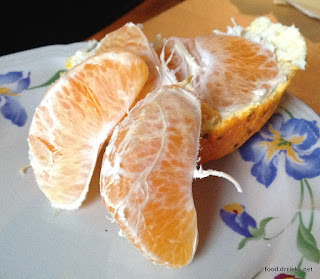 The Dekopon is an up and coming fruit to the market. Soon to be marketed under the "Sumo" appellation, it's a member of the ponkan family of citrus much beloved in China, Japan and other parts of east Asia. The distinctive lump at the top may serve to confuse people that it's a tangelo, but the flavor will not. Sweet, tart, complex, the fruit is not only seedless but easy to peel. I've heard some refer to it as the perfect eating citrus. I look forward to seeing it on the regular market, as domestic production is just starting to ramp up this year.

I was fortunate enough to try out the restaurant Place Pigalle in Seattle on a recent trip. If nothing else, the place has near impeccable service and pacing. With a key location overlooking the bay in Pike's Place market, one could dine there just for the view. 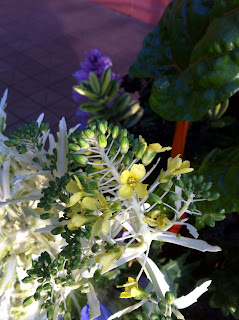 One thing I loved about the place is a pot of edible brassicas and chard outside set to grow wild as decoration. My dining companion did not recognize the kale and other edible plans used ornamentally, and it was truly quite lovely. 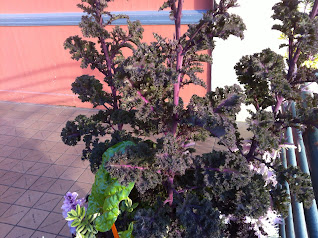 The food is classically French inspired with an homage to the ingredients available to the abundant Pacific Northwest. As with most French restaurants, there is an emphasis on pairing with wine, but then again, the test should be the appeal of the food in the absence of such a pairing. The complimentary bread was beautifully baked, with nice butter to go with it, and the each table had a bottle of large flake pink river salt in a conventional shaker - and odd receptacle as the flakes couldn't come out of the shaker top anyway. Our waitress conspiratorially mentioned that this was done to be a topic of conversation.
Our appetizer of mussels with a bacon glaze was a knockout. The sauce was redolent with butter, and delicious sopped up with crusty table bread. And given the incredibly rich nature of the foods served here, perhaps I should have stuck to ordering appetizers. 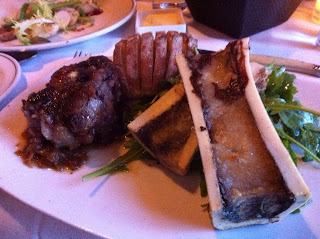 I chose to order the oxtail and marrow bones. It came with a peppery arugula salad and a very crusty roll sliced into connected slices (that is not a potato). The oxtail was simmered and then roasted, and the marrow was a straight roast. Both were rich and unctuous, and I needed all of the arugula to cut through the fat - and never finished the dish.
But I found the flavors strangely monotonous. It was rich, true, but lacked contrast and complexity. Funny thing is, I tended to compare the two cuts if they were cooked in the Filipino tradition: the oxtail in karekare (a peanut and annato based stew) and the marrow in bulalo (basically pot a feu for marrow bones), and would have had more flavor. The simple treatment, in this case, merely left a sense of indulgent boredom. So much so that I didn't want dessert.

I'm not a fan of recipes.

I think slavish adherence to recipes takes away from the fun and improvisation of cooking, engendering fear of failure. But I'd like to share an easy and delicious way of taking advantage of the coming abundance of tomatoes. The beauty of this method is that it works with almost any variety of tomatoes, and even those in somewhat less than "salad" quality will benefit from it. I recently came across a sale of plum tomatoes.

You can put a lot of tomatoes there. Sprinkle liberally with salt, a little olive oil, and what available fresh or dried herbs you have (except maybe rosemary). I had fresh oregano and thyme, so I used those.

Then stick the pan in a hot (350F) oven, and bring the heat down to 200F. Then go to bed. Really, just let it go overnight. The next morning, your kitchen will smell wonderful.

You can snack on these straight away, sprinkle a little more olive oil on them to go with olives, chop them up and toss into pasta or rice. Or batter and deep fry them. The possibilities are endless. They freeze well, and are vegan to boot.
Posted by Dr. Ricky at 4/02/2012 01:18:00 PM No comments: