Evolutionary Roads to Waking Up

2015 marks 100 years of the iconic hour glass shaped Coca cola bottle, the contents of which was the progenitor of the "cola" drinks so pervasive the world over. The name cola derives from one of the original bittering agents: the kola nut, the seed of an evergreen tree. Among many African cultures, chewing the kola nut provides a rapid energy burst due to it's high caffeine content. Oddly enough, this practice of energizing plant products spans multiple times in human history, though not getting connected until recent advances in global communication.

In Brazil, the stimulant was guarana, a plant related to the maple. Elsewhere in Spanish-speaking South America, yerba mate is consumed in various incarnations. In Asia, perfusions of the  leaves of shrub Camelia sinensis is what we call tea, and its cultivation and trade has shaped the histories of countries from India to America. But the stimulant in all of these plants, though they are unrelated, is the same: caffeine. And by far, the most popular source of caffeine (in fact, the substance is so named from it) is coffee.

Despite the diversity of these plants, the caffeine the contain are all chemically identical (even though some health nuts claim that caffeine derived from one plant has a different effect than from another). In evolutionary terms, this is quite curious. Proteins are usually directly encoded by the genome, and when two organisms make the similar proteins, we can infer relatedness from their ancestry. But caffeine is an alkaloid that is made by several enzymatic steps (believe it or not, the raw material is the same stuff that is used to build DNA). And expecting all these relatively distantly related plants to have the same enzymes would seem to be unlikely. The sequencing of the coffee genome, however, revealed an infrequently discussed but important phenomenon in biology: convergent evolution.

Most commonly, evolution is discussed in terms of speciation, where a common ancestor's progeny adapt to different environments across generations, and start diverging in traits - thus, the same Prunus will give rise to the cherry and the apricot. But in some cases, evolutionary pressure can take different organisms to evolve similar, or, in this case, identical traits. Coffee and tea, for example, do not have the identical enzymes, but they have evolved to produce the same effect on the raw material xanthosine, in an identical chain of events that produces chemically identical caffeine. Which probably first evolved as chemical protection against insects.

So, whether the bottle reads guarana, Red Bull, mate...it's the same stuff acting as the stimulant. And good morning.

Addendum: the chemical stimulant in chocolate, theobromine, turns out to be just one enzymatic step removed from caffeine.
Posted by Dr. Ricky at 8/13/2015 04:32:00 PM 2 comments:

While in the Honduras, I had the opportunity to sample some conch fritters. Unfortunately, deep frying in batter doesn't seem to be the best way to treat the mollusk, as the conch itself got rubbery, and the sweet flavor was overwhelmed by the heavy batter. However, the accompanying breadfruit fries were quite delicious. 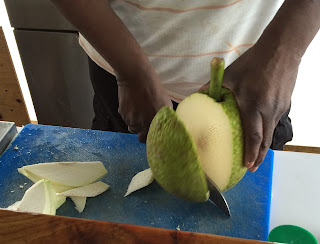 I'm puzzled by the poor availability of breadfruit in the Texas area. A staple in much of the world, the breadfruit is like a tree borne potato. When unripe, it is starchy, and can be cooked in all the various ways a starchy ingredient is used. On ripening, the fruit becomes sweeter and softer, and can be treated as much most fruits. The seeds are small and edible, the trees are propagated from cuttings, and can produce bountiful fruit for decades. The only issue is the tree grows only in tropical climates, but Texas should be close enough that a variety can probably be evolved to survive here. In a sense, the breadfruit reminds me of plantains - and we have a ready supply of that in the big cities. But, strangely enough, breadfruit remains remarkably rare.