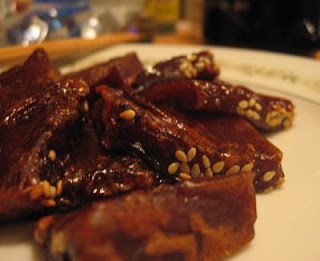 I could so use a moffle right now. What's a moffle? It's a mochi cake cooked in a waffle iron. What's mochi? Well, that is worth posting about - it's a type of rice cake.

The basic concept of pounded glutinous rice cakes is found in various East Asian cultures, mochi being the Japanese version, but also nien-gao in Chinese, tikoy in Filipino, and tteok in Korean. The sweetened versions are associated with the lunar New Year festivals, but savory applications exist.

Such rice cakes are chewy, sticky, and quite filling. But by cooking it in a waffle iron, it develops a crispy outer crust and a meltingly warm interior. Wish I knew a moffle maker in town :).
Posted by Dr. Ricky at 12/17/2008 12:38:00 PM