A few days ago, I managed to find a vendor for cage-free chicken and duck eggs. I bought half a dozen of each. I must admit, I've never worked with fresh duck eggs before, I've tended to get them already cooked or processed in some way.

Salted duck eggs are literally soaked in a saturated brine for an extended period of time until the proteins salted out, and then boiled briefly. The yolk from this preparation is rich and deserves its place among gourmet ingredients like bacon, batarga, caviar and foie gras which provide a fatty flourish to dishes.

Then there is the alkalinized century egg, fermented in lye for months to generate a dark ammoniacal egg absolutely delicious in congee. The dark color, however, often frightens experimental diners of the Western ilk.

Then, there is the infamous balut, an embryonated duck egg boiled and served in the Philippines and other parts of Southeast Asia, often considered one of the most extreme dishes in the world.

But what does the fresh egg look or taste like? Let's find out. 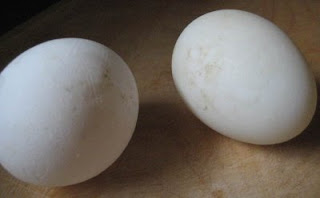 Here is a free range chicken egg to the left, and the duck egg to the right. The duck egg is a bit more elongated, and the shell is sturdier. But what's inside? 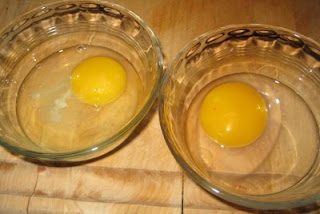 Here they are, cracked into a bowl. I suspect that the chicken egg isn't all that fresh, despite being free range, since the albumin was a bit watery. The duck egg was nice and thick, though, staying high above the surface. Notice the significantly larger and deeper colored yolk. The albumin looks milkier, too, but that could be because it was fresher. The little blood spot on the duck egg may indicate that this is a fertilized egg, and could have been made into a balut! 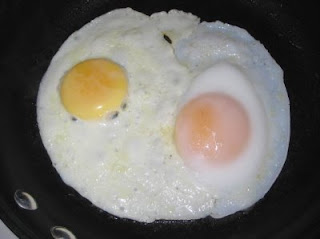 A simple preparation, sunny side up on butter. Ah, look at that rich orange color of the duck yolk. I slide the prep out to a plate... 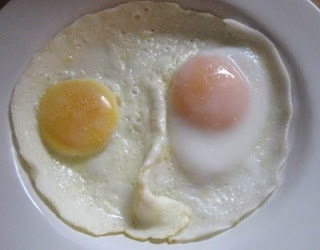 A final flourish of salt and pepper, and breakfast is served. 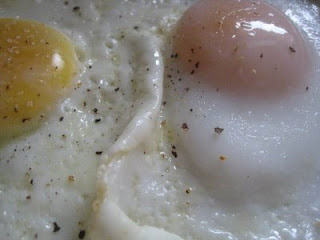 Okay, this may be one of the most indulgent breakfasts I have had in a while. That said, the real character of a duck egg is the yolk - rich, flavorful, I really should try using it in ice cream. The while may make a good meringue, I don't know.
Posted by Dr. Ricky at 12/29/2008 02:00:00 AM