Last night, I was musing over the term vegetarian. Being allergic to crustaceans, my usual strategy when I am in a country where I am not familiar with the language is to order the vegetarian meal as a safe option. In Germany, though, this strategy backfired as I was presented with a platter of pasta covered in shrimp. I think the problem comes down to whether your understanding of vegetarianism is one of inclusion or exclusion. The German (Continental European?) view of vegetarianism is a practice of not eating meat (specifically, land meat, I guess), and so, anything else is fair game. But really, perhaps it is a little easier if we make our definitions around what is included rather than what is not. 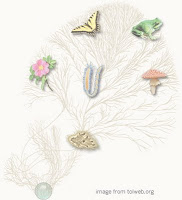 Of course, scientifically, the categorization is artificial and a matter of human convenience. We see what we eat as either animal or vegetable, when in fact, on the great tree of life, these are fuzzy definitions cornering very tiny twigs in the biodiversity of the planet. The vast majority of categorizable life is not even multicellular, and feeds the largest creatures of the planet. For example, many vegans will conveniently consume mushrooms even though, biologically speaking, they are more closely related to animals than plants. That's not even bringing in the issue of horizontal gene transfer in the form of transgenic foods, where, for example, an antifreeze gene from a fish is transferred to tomatoes for frost resistance makes is somehow no longer a vegetable. Of course, tomatoes were never vegetables in the first place, they're fruits :).

Even those of us who consume animals are primarily focused on vertebrates, when most animals are invertebrates. The patriarch of the Western Casa McBardo has made it his New Year's resolution to consume as many different creatures as possible this coming year - we rang the year in with chicken, pork, beef, buffalo, and duck. No doubt elk, deer and rabbit will make it to the plate soon enough. Here are a list of "off the beaten path" animals that I know some precedent in being eaten, and thus, are suggestions:
Hmm, that list is looking really heavy on the vertebrates. Let's diversify: