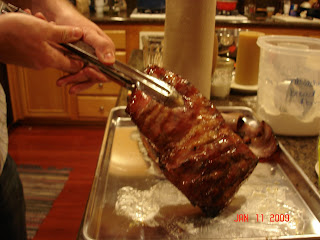 Dr. Ricky has graciously offered me the opportunity to blog here while he's off playing volleyball in outer Uzbekistan. I'll try not to damage anything while I'm here.

While Dr. Ricky visited us here in California, we made bacon. Oh yes, bacon. This was my second time creating bacon from Michael Ruhlman's book, Charcuterie. Previously, I made the basic bacon (Dr. Ricky and I used the first batch in soup discussed here):

Take 1/4 cup of that nice dry cure, and rub it all over a pork belly. Cure it for 1 week in the fridge (in a ziploc bag). It'll dry out, and a fair amount of liquid will accumulate in the bag. At the end of the week, the pork belly will become firm to the touch. Wash it off, and put it on your smoker. Smoke for several hours (takes about 3) at 150-200F, until the pork belly gets to 150F internal temperature. Then chill in fridge, and slice off thinly. 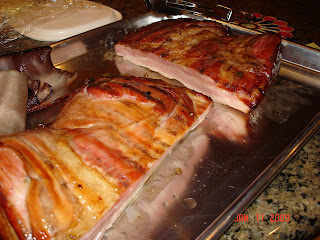 I screwed up the first batch of bacon. It was still yummy, but I forgot to peel of the rind. You're supposed to peel it off while the bacon is still hot, otherwise when you slice it, each slice of bacon will have a thin piece of skin on it.

So, the first batch was yummy, but I thought I could do better. Dr. Ricky and I tried something new with the second batch - we each made our own bacon. Dr. Ricky made the savory bacon - with garlic, bay leaves and pepper, and I made the sweet bacon, with added maple sugar. Cure as normal, and smoke as normal. 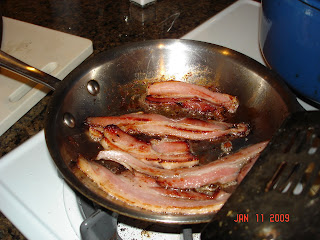 So, how did they taste? The savory bacon was fantastic. All kinds of rich flavours in there that weren't in the previous bacon. What can I say, I love garlic. The maple bacon was... disappointing. It was still better than an average grocery store bacon, but there was no discernible maple flavour. Just bacony, porkish goodness.

Re-reading, I realize that even the maple bacon was fantastic. And easy. If you have a smoker, there's no longer a reason to purchase bacon. Homemade is sooooo much better. And cheaper. And really, not that hard. The most challenging part is slicing the bacon thin enough (I confess, I now have meat slicer envy. Mrs. McBardo isn't super excited that I'm lusting after meat slicers now, but that's another post, for another day).
Posted by greglor at 1/21/2009 10:32:00 PM

Email ThisBlogThis!Share to TwitterShare to FacebookShare to Pinterest
Labels: bacon