When we went to the store to renew our stock of eggs, I beheld a sight I haven't seen before - not even during Hurricanes Ike or Rita - a completely empty egg section. Not an egg to be seen anywhere. That's when I learned that aside from the passage of the repugnant and oppressive Proposition 8, Californians also passed Proposition 2, which regulates the "cruelty to farm animals", and thus, includes language about the size of pens for egg laying hens. Thus, a sudden shortage of eggs, probably until they figure out to remain profitable. Egg costs may go up in California.

But what was cooked last night for dinner? Well, we started the night with some candied jalapenos with some sour cream on crackers as the wine was opened. 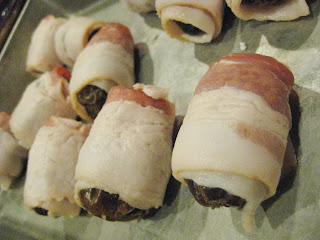 We started off with bacon wrapped dates. These were a hit for New Year's eve as well. Medjool dates, stuffed with goat cheese, wrapped with bacon, and broiled until crispy. The ones on New Year's eve were done with home made, hand cut, bacon, and consequently, superior to these using store bought bacon. But these were still good.

But that home made bacon made it's appearance in the next dish, where the remainder was cut into lardons, and rendered for it's fat. That fat, along with the left over roasted Okinawa purple sweet potatoes, were cooked into a soup, spiced with cloves, nutmeg, ginger, orange zest, chipotle, celery, carrots, and topped with the lardons. 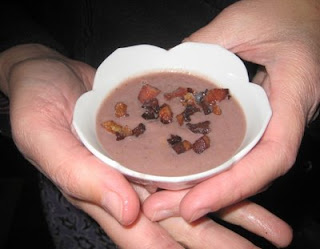 Spiced purple sweet potato soup
On to the main course. We had some beautiful muscovie duck breast, which Greg proceeded to steam, marinate in honey and tea, and smoke for an hour. On the other side, I had prepared a batch of pain l'ancienne (aka, no-knead bread), and roasted poblano peppers for a poblano and pomegranate salad. We had purchased some kurobuta pork in the form of a chop, and I decided to pan-roast it simply with salt and pepper to maximize tasting the pork flavor. 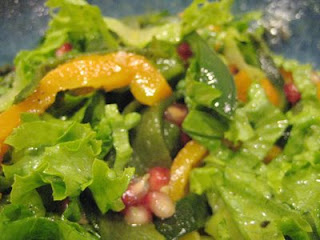 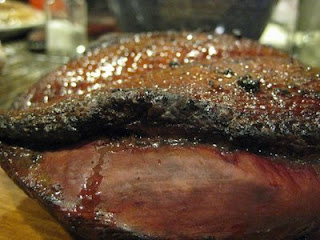 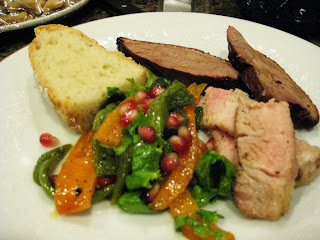 The final assembled plate.
The Kurobuta pork was a revelation. Juicy, flavorful, porky, in this simple preparation, it really shone. Not a morsel escaped, the bone gnawing flavorful experience. 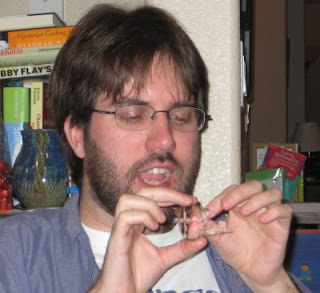