After the series of "appetizers" - for lack of a better term - we moved on to the fish courses. Which is kind of fun, because we only had one vertebrate fish in the series. While shopping for ingredients, we noticed that the store (99 Ranch) stocked #6 green New Zealand mussels in addition to the more conventional black mussels. Seeing no price difference between the two, we opted to take a risk, and get the green ones - mostly because they were so pretty. For the party, I took a large heavy pot, heated a bit of oil, threw in slices of ginger and galanga root, and a bashed up lemongrass stem. A few minutes of cooking, and in go the cleaned mussels (still alive, I hope), along with a splash of water. Clamp on the lid, and go back to socializing. About 15 minutes later, I peek in the pot to find that most of the mussels had opened up (whew! - we were a little worried that the soak in California tap water would be too harsh on these saltwater denizens). I took them to the table to be eaten.

The mussels were a revelation: plump, meaty (most of them nearly filled each shell), they tasted clean and bright, and the liquor was yummy sopped up with the grilled bread. And one guest got a bonus: this little baby crab was probably trapped inside one bivalve. We joked that it's like a king cake. More like a shell game, I guess (ba-dam-bump - thank you, thank you...)

We followed this up with a #7 ceviche, prepared from red snapper, lime and lemon juices, chopped up jalapeños, kumquats, cilantro and Asian pears. Fruity and fishy - but it works.

The grand dame of the piscine tableau deserves a post of its own. A hint, though - it involves a spiky purple ball. 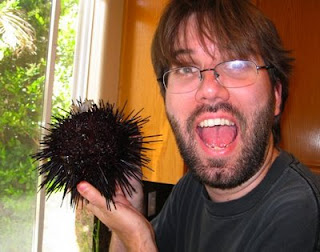