One thing we have learned about these multicourse tapas dinners is that we should designate someone to be the dedicated photographer. We haven't take pictures of all the dishes, which is unfortunate. But the early portion of the meal continued.

#2: After the pahjeon, we served these parmesan crisps filled with goat cheese. Parmesan cheese was carefully microplaned, mounded in ring mold on silpat sheets, baked, and quickly formed into these cups by forming them into egg case cups. The crispy cheesy goodness was further accentuated by a creamy goat cheese filling. These were rather well received. 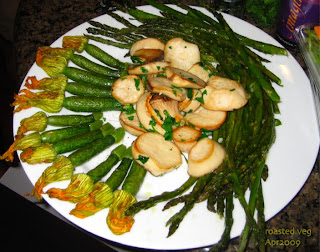 #3 The next course was a plate of roasted summer squash blossoms, and spring asparagus, done in olive oil and salt. At the center are king oyster mushrooms, cut into rounds, and treat like scallops (seared with a little salt, finished with a dab of butter, and a sprinkle of flat leaf parsley). Some were surprised that the flowers were edible, and many have never had king oyster mushrooms before. They are a real treat, and hold up very well to the searing treatment.
Posted by Dr. Ricky at 4/20/2009 10:31:00 AM