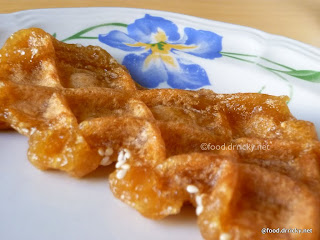 My congratulations to BBQDude for bagging the mochi beast on his latest cooking adventure. Double kudos for using yuzu. The use of pounded glutinous rice is common in Southeast and East Asian cuisine, both in sweet and savory applications, although due to the relative paucity of sweet applications in Asian cooking in general, the short grain glutinous rice is itself often called sweet rice. Despite the name, glutinous rice does not have gluten, but derives its texture from amylopectin.

My own fascination with mochi centers around the "moffle" - mochi cooked in a waffle iron. Now that I have a waffle iron convenient to me, I revisited the idea. You can use store bought prepared mochi - or in this case, I used brown sugar nien-gao, popular in the local Chinese and Vietnamese communities during the lunar new year. This version of the sticky rice cake is meant to be cooked a second time, kind of like second generation polenta. Versions include being dipped in egg before being deep friend, or simply grilled over a fire. Perfect fodder for a hot waffle iron.

Here, the moffle is genius. Allow it to cool slightly, or have hot napalm stuck inside your mouth. But the outer crust is crunchy, the inside is chewy, soft, and the sesame flavor is a great counterpoint.