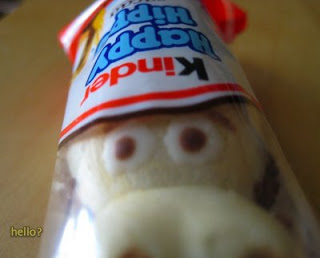 This is an update to a posting that was originally written in May, 2009. It's part of an irregular series of posts about processed food that get my approval.

As I walked through Pike's Place Market in Seattle, I was awed by the mounds of fresh salmon lying about -- all of them missing heads, like a macabre mass decaptitation. You know how some people have a problem eating fish with the head still attached? This somewhat American (maybe North American) peculiarity is often attributed to a revulsion from a food item that can stare back at you

Well, leave it to the geniuses at Kinder to come up with a candy that can look at you. And taste great, too. 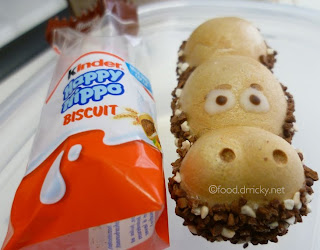 The Kinder Happy Hippo is a cookie shell filled with this hazelnut chocolatey stuff. Apparently, a version also exists that is filled with vanilla custard, but I have not tried that. This is not something I'd try to replicate at home. For the longest time, I would scour Houston, looking for shelves that would stock them in a poorly seen corner. Lately, though, they've become more easily available - I found this specimen in Phoenicia.

The question I ask then, is if people would eat this heat first...or tail first. Why, yes, the attention to detail is such that they have tails. 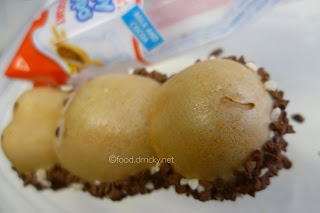