One thing I appreciate about the Jewish Passover is that it's centered around a meal. The seder meal itself is a thing of organizational beauty - every item has its place, and every portion has some significance to the Exodus story. Every item, except one.

The bitter herbs signify the bitterness of slavery. The charoset represent the mortar used by the slaves to build the storehouses of Egypt. The matzoh was the unleavened bread because the dough didn't have time to rise before the exodus. And the roasted lamb bone represents sacrifice.

And then there's the roasted egg. 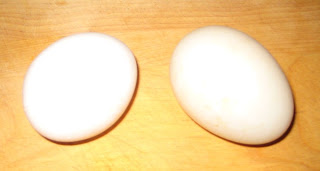 Despite the name, the roasted egg is really hard boiled, but then lightly roasted. Unlike the other items, the egg isn't Exodus specific - alternate interpretations call it a stand in for the usual offerings the Israelites bring to the temples, or as a symbol of mourning. Some rabbis affirm that the egg is optional in the seder meal (usually, it's eaten as an appetizer of sorts after being dipped in salt water).

Archeologically, we can interpret this as just another remnant of the usual fertility symbol during spring - essentially a distant, somewhat scorched and less dressed up cousin to the Easter egg.

The best explanation I have heard about the roasted egg came from a colleague of mine, and it's Exodus specific. The story goes that when Moses parted the Red Sea, the path ahead wasn't dry land. Rather, there was still enough water such that people had to wade across hip deep. And the dipping of egg in salt water reminds us that Moses had to have his cojones in seawater during the escape.
Posted by Dr. Ricky at 4/19/2011 09:49:00 AM