Dr. Ricky has left me alone with the keys to the blog. Who knows what he's going to do once he returns from his volleyball vacation in Swaziland. LET'S TRASH THIS JOINT!!!

I managed to get some ground kangaroo meat at my butcher the other day. Score! I had planned to cook it for the Superbowl, but life intervened. So we had it tonight.

Kangaroo meat is dryyyyyy... No fat at all.Check out this photo of the precooked meat: 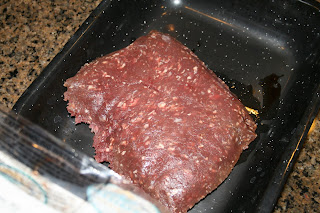 After consulting with the clever folks at Chowhound, I decided to make plain, old burgers. Kangaroo burgers, that is. But to overcome the lack of fat, I added chopped up, fried bacon. (Conveniently, I had some leftover homemade bacon that was perfect for the task at hand). So I fried it up, and I added rather a lot to the 1 lb of kangaroo meat. 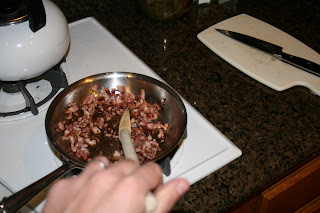 Next is the formed patty. I didn't season it at this point. I wasn't sure how much salt the bacon would impart, and I didn't want to add anything else for fear of missing out on the kangarooey flavours. Note the little bacon chunks in there: 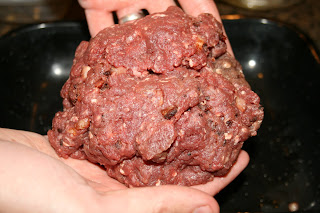 And finally, the grilled burger. It was tasty. Woodsy even, if that makes any sense. Not gamy, like venison (or moose). It was distinctly non-beefish. And really quite good (Even Mrs. McBardo, who was rather reluctant agreed that it was tasty). 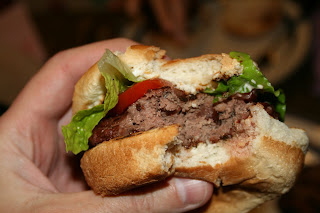 However, I will do it differently next time. First, more bacon. Or butter. Or something fattish. One gentleperson at Chowhound suggested soaking bread in milk and adding that. Whatever I do, I need to add more moistness. The burger didn't sizzle much on the grill, and it was a tad dry (though not as dry as I had feared it would be). So next time, we'll add more fat.

Second, it needed salt. I won't be frightened to salt it a bit in advance (though not too much, or I'll dry it out). But other seasonings? Not so much. It doesn't need it. It comes pre-made with kanga-seasoning.