Somewhere between a soup and a drink: Oatole

Long ago, I encountered an option in a vending machine for a can of V8. Curious, I popped open the can of savory chilled vaguely synthetic liquid. I went no further than two sips - I wanted to pour it out to a pan, and eat it heated up with a piece of toast. Having chilled tomato soup just didn't sit well with me. We have an odd relationship between soups and drinks. In general, soups are considered warm savory liquids presented in a bowl, and eaten (drunk) with a spoon, while drinks tend to be sweeter, colder, and presented in a glass to be consumed by bringing the vessel directly to the mouth. So many things break these paradigms, though.

Drinks can be savory (bloody Marys come to mind), or warm, or chunky enough to require spoons (name your favorite super thick milkshake, more so if supplemented with tapioca pearls). Soups can be cold, as with the favorite gazpacho, or even sweet and alcoholic, such as sweet fruit soups. Moreover, soups are now often served in mugs sans spoons to be drunk as coffee.

Given the current rash of cold weather in Houston, I am enamored of the Mexican soup/drink called atole. Basically, it is thinned out masa, flavored with anything from cinnamon to fruit to chocolate (the last is also called champurrado - I haven't found a translation for the verb champurrar). Thick, mildly sweetened, it retains the heat in the liquid, and the thickness encourages slow sipping. Moreover, it's substantial enough to be filling.

Taking inspiration from the atole, I have developed a cereal soup/drink for breakfast, based around oatmeal, and peanut butter. I call it "oatole". 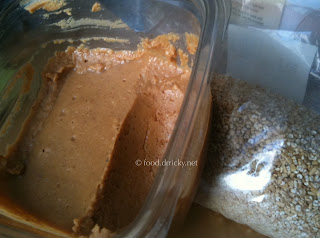 Take some leftover cooked steel cut oatmeal (I think the instant kind would work, but the steel cut version is superior, better if mixed in with some cooked oat groats), add about an equal amount of milk, and a spoonful of peanut butter. Microwave until hot, stirring until smooth, and sweeten to taste. A dollop of strawberry jam can make this intriguing, so does a dash of vanilla. Cocoa powder can provide a chocolatey kick. Serve in a mug or a bowl with a spoon, a warm blanket, a cold night, and a movie.
Posted by Dr. Ricky at 12/09/2010 12:21:00 PM