For whom the bhel tolls

One thing I admire about Indian cuisine is its inventive embrace of sweet and savory snacking. An entire area of cooking is devoted to chaat, the catchall name for small snacks eaten at just about any time of the day. And perhaps my favorite Indian dish is a chaat item called bhel puri. 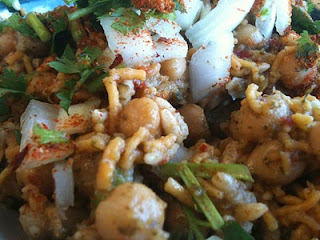 Like many archetypal dishes, there's really no set recipe for bhel puri, it adjusts depending on the availability of ingredients and taste. But at its essence, it consists of puffed rice and other crispy snack foods like sev (a noodle-like item made from besan - chickpea flour), tossed with boiled potatoes, fresh onions, spices, coriander, fresh chickpeas, and one or two chutneys. Some versions include yogurt.

The resulting dish is a riot of textures and flavors, from sweet to spicy, crispy, juicy, starchy and filling all at once, with that fleeting nature of breakfast cereal in milk: its texture and flavors change as you consume it since the components hydrate and meld in between bites. I've had few dishes with this kind of fun in its existence in contrasts; chefs like Grant Achatz are lauded for one or two dishes that capture the temporal frivolity of this common Indian/Pakistani snack.

I've had the opportunity to compare the bhel puri from two Houston shops: the stalwart Bombay Sweets, and a younger chaat shop Bismillah. Both are located in the "Mahatma Ghandi District" centered around the intersection of Harwin and Hillcroft. The Bombay Sweets version is crispy, chunky, spicy and a bit sweeter, redolent with tamarind and fresh cilantro from two separate chutneys. It's addictive and filling, and a great snack to have on a hot Houston afternoon.

The preparer at Bismillah  asks if a spicy version is requested; their version is oddly warm, and has the tang of yogurt. The addition of whole chickpeas offsets the duller brown colors of the snack, but stuff I got was oddly soggy.  And, unfortunately, that's a major failure for a dish that capitalizes on textures as its strength. Although I've by no means tested all the bhel puri versions in the city, I'm afraid I can't recommend Bismillah for this dish.
Posted by Dr. Ricky at 6/16/2010 02:59:00 PM