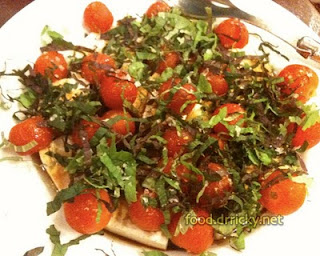 On my most recent trip the the Great Western Casa McBardo, we cooked a lot out of BBQ Dude's newest cookbook acquisition: David Chang's Momofuku (the title of which also became the cooking battlecry of the weekend). One of the items we did is something that seems almost too easy in simplicity - but it's all about technique. An East meets West interpretation of the classic Insalata Caprese - only in this case, the role of mozzarella is played by silken tofu, and basil by a generous chiffonade of shiso leaves. Tomatoes here are cherry tomatoes that are individually peeled (a pain in the arse, but it definitely makes a difference in the final dish). And the kicker here is the dressing is built from a base of taré, rice vinegar, canola oil, and a dash of sesame oil. Finished with a generous sprinkle of pink flaky finishing salt, and it's a riot of textures, flavors and layers.

David Chang suggests four different versions in Momofuku, and envision so many more. I like that cookbook; Chang has a cooking style more in line with mine - rarely strict, and open to easy improvisation. I certainly want to give the proper bo ssam another try.
Posted by Dr. Ricky at 1/15/2010 09:46:00 AM