What do you cover a pig? 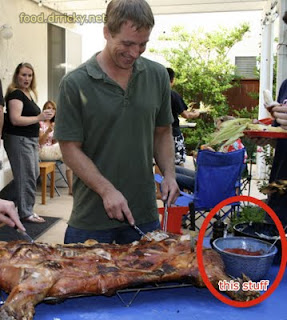 When presented with the challenge of what to serve alongside a 50lb roasted pig, I thought about it long and hard. If the main course is as large, porky, and unctuous as roast pork, then the sides cry out for fruit and acid. Sadly, we didn't photograph those as much, as we were too enrapt with the pig itself.
The first item was a home made ginger plum sauce. Couldn't be easier to make. Cut up, and de-pit some purple plums (we got some somewhat underripe ones from 99 Ranch - they're perfectly okay - the pectin will help a great deal). Cut into manageable sized pieces (we did quarters, but perhaps sixths would be better), and pile them to one side. I think we did 20 plums.
Next, in a large heavy non reactive sauce pan, heat up a little bit of neutral oil (canola or peanut are fine), and just toss the the plum in. Don't worry if some of the plums don't reach the bottom of the sauce pan, the variation in texture will be great. Meanwhile, grate some fresh ginger - for the amount we did, I used about 1 cubic inch of peeled ginger on a microplane. As the bottom plums liquify, stir in the ones from the top, and then the ginger. Keep cooking covered on low to medium heat until you get this great thick sauce, with chunks of cooked fruit. Stir in some Chinese five spice powder, a bit of salt, and some agave syrup to adjust the sweetness (sugar or honey can be used here, of course...but the agave worked well).
Cool it a bit before serving with the pig.
Posted by Dr. Ricky at 8/28/2009 03:07:00 PM