Out in New York City, there's a place called the Cupcake Cafe. It's still there, I believe, and has the most beautiful cupcakes and cakes, decorated in realistic icing flowers. Moreover, the buttercream icing is tastefully executed, and the flavors complemented the cakes well. Even though this was in the heart of Manhattan, cupcakes were reasonably priced, with monstrous sized versions selling for around $4.
Enter the LA Sprinkles Cupcake, which credits itself for starting the "haute cupcake" craze. Which seems to mean charging an awful lot for middling product by packaging it trendily. Here in Houston, we have a couple of places that are pure cupcake businesses: Sugarbaby and Crave Cupcakes. I don't understand the popularity of Sugarbaby - the frosting is horrendously sweet, the cakes themselves are middling, and each cupcake sells for around $3. And they are so popular that clients are rationed. 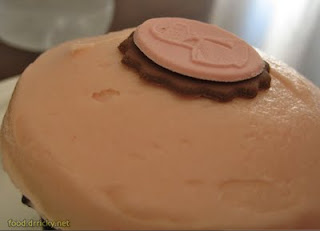 The above is a strawberry cupcake from Crave. In this case, though, the frosting is more judiciously applied, but again, the cake itself is so soft as to hold no integrity after the paper is peeled off, and while it's an acceptable cake, the cost of $3.25 per cupcake seems to border on extravagant.
Perhaps the appeal of a cupcake is the ability to maximize the frosting to cake ratio, for those of you who believe that the only real role of a cake is to convey frosting. In which case, you'd love a Three Brother's cupcake: 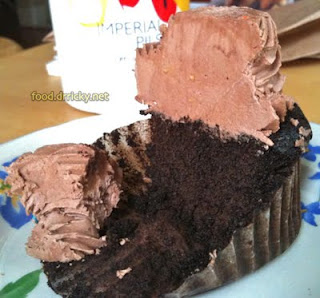 I believe there is as much frosting as cake in this case. Neither of which were particularly good.
So, when it comes to cupcakes, I say the standard to beat is still the Cupcake Cafe in New York City.