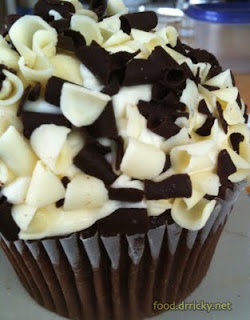 I dropped by the newly opened HEB Buffalo Market just to check the hubbub, and decided to try out the bakery. Given my recent posting on cupcake-specific bakeries, I spotted this little beauty for $1.99 on the counter. It's impressive - they even make the plastic case for it specific for one cupcake: 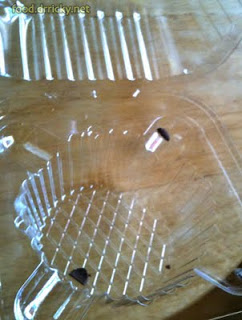 Put that in your nonbiodegradable injection molded pipe and smoke it.

Well, how was it to eat? The cake itself was nothing too spectacular - kind of like what I found in Sugarbaby's. For only half the price. The gimmick is a blob of fudge in the middle of the cake: 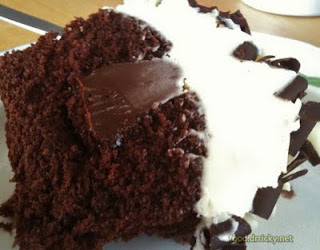 The cap of frosting was made with cream cheese - now that was interesting. It was okay, but somehow clashed a bit with the chocolate. At least the sprinkling of shavings tasted of real chocolate.

You know, I didn't mind so much because it was cheaper than those boutique cupcakes, and tasted almost the same (which isn't saying much). So far, no craving for these things - I'll settle for a Jungle Cafe pastry instead.
Posted by Dr. Ricky at 8/10/2009 06:31:00 AM