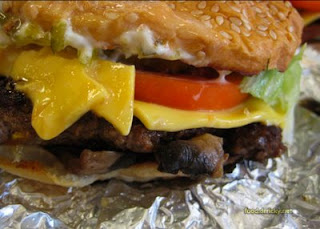 Speaking of allergens - I recently had a chance to go try out the first of the Five Guys Burger stores that opened here in Houston. I guess the concept is simple enough - instead of being distracted by stuff like chicken and toys, the store just focuses on making burgers and fries. That's about it. Oh, that and peanuts.

You see, the signature thing about the place is that they keep bulk containers of peanuts for people to snack on while waiting in line, talking on the phone, dessert...there are peanut shells everywhere (makes you wonder why they don't serve elephant burgers...). Fortunately, the very front of the store has a sign that clearly warns away people with peanut allergies - that this place is toxic for them.

About those burgers - they come cooked one way (no rare, no other way - the rapid assembly line allows few choices other than toppings). They're an okay, moist medium...and rather bland. They could be better seasoned. It's reasonably sized for the price, and the burger toppings are fresh (tomatoes were remarkably un-mealy, meaning that this is one group that didn't refrigerate them in spite of the Houston heat). It's better than the average burger...and that's not difficult. The average burger is bad.

Servings of chips were ridiculously generous. The large order could have fed a family of four. Of course, I see the next table over, and the group of four there had FOUR orders. The fries themselves are okay - not limp, just a little greasy, and the tell-tale skin on that is supposed to signal that these potatoes were real (and not that the processing cut out a peeling step). 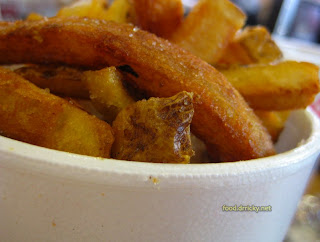