Due to the large immigrant Vietnamese population living in Houston, we have a rather good assortment of Vietnamese food; loyalist debates over who makes the best pho broth isn't quite as popular as debates over who has the best cheeseburger, but it can get just as lively. However, because it is so common here, I seldom get a chance to eat the celebratory foods of the Vietnamese cuisine.

Encountering it while traveling is another issue altogether. On a recent trip to Seattle, a friend of mine introduced me to a notable Vietnamese restaurant, The Tamarind Tree. Tucked in an obscure strip mall in Seattle's expansive Chinatown, this restaurant is beautifully decorated inside, and appears to be patronized by a mix of Asian and non-Asian clientele. 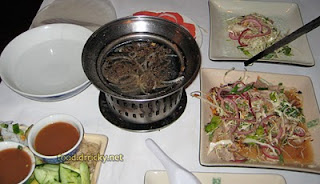 Noting that is is a special occasion, we simply opted for the festive 7-course Vietnamese beef dinner allegedly for two. We'll learn later that this is very much an underestimate - we could have fed four. It started off with a very flavorful beef and herb salad, which we were slurping the leftover dressing from the dish. 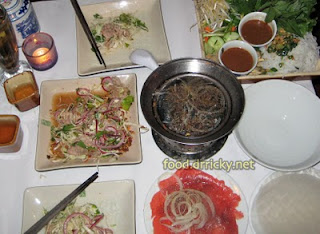 That was followed by this beef fondue item, which was the most complicated thing of the night. Very thin slices of beef tenderloin were served along with a bubbling pot of broth, a side of thin tapioca wrapping sheets, a bowl of hot water, and an enormous dish of various vegetables (lettuce, thin slices of green banana, peel and all, cucumber, carrots), herbs and rice noodles. Along with little bowls of sauce.

We surmised that the idea was to cook the beef slices in the broth, and stuff them into the tapioca wrapping paper after that was softened in the hot water, supplemented with vegetables, dipped in sauce, and wrapped once more in lettuce. It took a while to assemble, and in the end, we were just grabbing things willy-nilly and eating them. 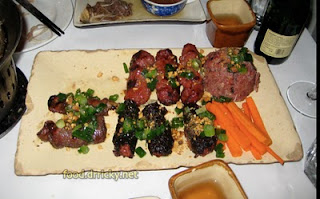 The last course was a humble bowl of beef congee (rice porridge). At least, it looked humble - because flavorwise, it was a knockout. Although stuffed, we couldn't let one spoonful of that porridge be wasted.