Not quite on the mark

We recently did a return trip to Umai, and for me, it was ostensibly to try their rendition of the classic Japanese shoyu ramen. On their menu, it's simply listed as Umai ramen without further explanation, although our server verbally expounded that there are two versions - one with pork, and the other just soy sauce broth. I asked for the pork version, thinking that it's the tonkotsu ramen (broth prepared from pork bones); I was then quietly informed that there'll be an additional $1 charge for the pork version. 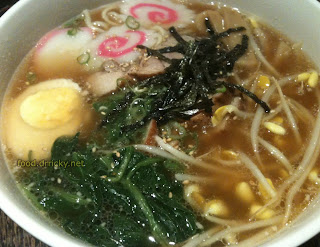 The Umai Ramen (pork version)
By way of backdrop, I've had the fantastic Santuoka ramen out in LA, and can't help comparing the two. Also, bear in mind that this is a $10 bowl of noodle soup; I expected a lot. Good points: the noodles themselves had a good chew and weren't overcooked. But that's about it - the rest of the bowl was okay to borderline mediocre. The pork was a bit tough, the vegetables were overcooked, and the broth - ah, that's the downfall - it tasted "fishy". I'm not sure if it was some synthesis of the shoyu and the bamboo shoots in there, but I could swear I tasted mussels in there...and not fresh ones at that.

Shame, I was so looking forward to this. Do try the agedashi tofu here - the kitchen has a way with fried items. There's at least one other noodle dish that piques my interest at the Umai menu, but that'll have to wait for another day.
Posted by Dr. Ricky at 3/03/2010 12:35:00 PM