Formally, the word for delicious in Japanese is "oishii", and we in Houston have a restaurant so named, known for inexpensive but acceptable sushi. Oddly enough, when eating something particularly tasty, most Japanese exclaim "umai!". 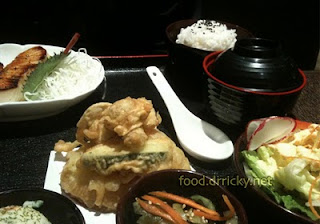 As it turns out, we have a restaurant in town called Umai. We paid it a visit on a recent cold and rainy night, and it's a good choice for that weather. Umai is pretty distinctive in the Houston culinary landscape: it's a Japanese restaurant that is not a sushi joint. Oh, sushi is still listed on the menu, but the selection is very limited, in a tiny section of the large menu, and just primarily to makizushi. 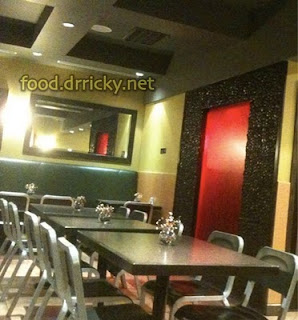 The interior of the place is brand spanking new, and modern in sentiment. I liked this accent wall framed by a collection of smooth black river stones.
I applaud that the menu focuses on aspects of Japanese cuisine that is largely ignored, or at least sadly glossed over in other restaurants in the area. Most of the main part of the menu offers grilled fish or meats that can be ordered a la carte, or in "bento-style" sets with salad, soup, and three variable appetizers. We tried the miso glazed sea bass which was succulent. Among the sides, we were most impressed with the pickles; Japanese pickles, particularly those that rely on rice bran (nukazuke) are again rarely seen in Japanese restaurants, but are a commonplace item on the Japanese table.
The menu also lists a sizeable ramen and udon section, including the mysterious "Umai ramen" with little explanation. When I quizzed our pleasant server, we were informed that it is in fact, two different kinds, one soy sauce based, and another pork bone based -- sounds like the more traditional ramens that rameniacs rave about online. I've resolved to go try them eventually - but decided to taste the more untraditional spicy beef ramen, to compare it to the other interpretations of spicy beef noodle soups found around town.
The broth was indeed spicy, with a burn that warms the back of the throat. I was a little concerned that it wasn't boiling hot - as most ramen served is - but as it turns out, it was to avoid overcooking the slices of beef tenderloin in the broth, which were tender, and toothsome. I do have a nitpick about the noodles themselves, which seemed a little gummy and tended to stick together, as though they were pre-cooked, and left to sit a while.

All in all, our initial visit to Umai was quite good, and, given the very approachable prices, we'll be back. We may have one of the few true ramen shops in town.
Itadakimasu!
Posted by Dr. Ricky at 2/18/2010 03:54:00 PM