Warning - this is a long one.


Much is written about high fructose corn syrup (HFCS), and a lot of if accessible on the internet. Some of it is true, some are hyperbole, and others downright bunk. But I'll summarize a few salient points and sentiments:

Okay, all caught up now?


A recent paper out of Princeton University is being heavily touted by several media outlets (and various bloggers, and Twitter posts) as the scientific proof that HFCS is inherently much worse than regular table sugar (sucrose) healthwise, specifically as a causative agent in obesity. Of course, most of them link back to a press release by Prince University itself, complete with posed pictures of students measuring out orange soda pop, rather than to the original paper itself (sadly, though the paper is often behind a paywall). Amongst the hue and cry, Marion Nestle appears to be the lone voice of reason. She was wise enough to actually read the paper, including posting a link to the actual PDF. [Correction, Karen Kaplan of the LA Times also calls the study to question. And is getting lambasted by her commenters.]


And she comes to the same conclusion I did - that this is such a poorly designed and described series of experiments that really, the conclusions derived are hyperbole at best, and misleading at its worst.


Based on this paper, a number of claims are been made about the effects of HFCS on the lab rats in the study:


1. HFCS affects the rats physiologically differently than sucrose, causing increased weight gain, even though the concentration of HFCS fed is less than the sucrose.


2. Male animals fed HFCS gained 48% more weight than those who didn't, comparing it to a 200 pound man gaining 96 pounds.


3. That the increased weight gain attributed to the HFCS even though the rats were fed a more dilute amount compared to sucrose, implying that HFCS calories convert to fat more efficiently.


But does the study really support these results? Let's take a look at just one summary figure: 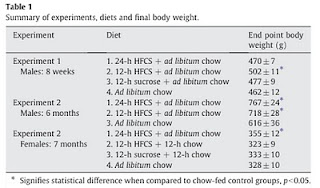 Okay, that's kind of tough to interpret. Let's just look at the first two experiments - here, the scientists started with a bunch of male lab rats, starting with an initial weight from 300-375g. Then they gave them food ad libitum - that means unlimited, or until the animal decides to stop eating. Essentially, let's give the rats an all you can eat buffet for 2 months. One set of rats just got water with the bonanza. A second set got 10% sucrose for 12 hours a day. A third one got 8% HFCS for 12 hours a day, and a fourth set got 8% HFCS for 24 hours a day.
Here is already a problem with the design - there are three factors being mixed; concentration of sugar, identity of sugar, and period of administration. We can't tell their effects apart from this design.
Okay, at the end of 2 months, lo and behold, the mice went from around 350g to 460g with an unlimited diet. Big surprise. Throw in some 10% sucrose 12 hrs a day, and the weight goes to about 480g. Change that to 8% HFCS, and whoa, it's up to 500g. So, that's considered significantly different, right? But if HFCS is made available 24 hours a day - wait, it drops to 470, no different that sucrose. That's a headscratcher, right?
But the experimenters blithely move on - they state this conclusively proves that sucrose has no appreciable effect - and remove it from the long term study, where they extend exposure to six months. After six months of unlimited chow, basically, the rats doubled in weight with water, and with added HFCS to their diet they tack on another 100-150g of weight - huge by rat standards. But at this stage, the comparison with sucrose is moot.
So, where did this 48% figure come from? I think it's from the long term study, where rats essentially gained 250g more on chow alone, but with HFCS, they gained 400g more. Fudging the numbers a bit there, I can see how a 48% number can be derived - but the correct analogy is more like a 200lb man gaining 200lb without HFCS, and 300lb with HFCS - if  they were eating all the time. The real problem being, of course, the unlimited diet, not the HFCS.
The results from the female rats are even more  confusing.
I don't want to be it the position of defending HFCS, but I do want to defend good science, and studies like this besmirch the hard won reputation of well designed scientific studies, specially when it gains mindshare through press releases and congruency with running political passions. Bottom line - this study neither supports or debunks the contention that HFCS is metabolically different that sucrose in a long term dietary situation. It provides observations that can build new testable hypotheses, but that's it.
Please stop spreading the mindjunk around.
Posted by Dr. Ricky at 3/25/2010 11:46:00 AM