Flares of brilliance, floods of abundance

The reasoning behind this junket to New Orleans was put in pretty plain terms last night: the city wants the world to know that it's back. And it's exploring bloggers and social media as the new way of sharing it with the world. After meeting my fellow bloggers, we were treated to a meal at Emeril Lagasse's restaurant, Delmonico. And it's difficult to have a bad meal when you are asked to order anything you want. Pictures coming later, although many have live-tweeted the meal.
In some restaurants, one is impressed by the attention to detail and complexity of the dishes offered. Delmonico isn't one of those restaurants - instead, the food comes to you with abbondanza. Not so much in volume but in voluptuousness. The service is top notch, and follows strict norms, attentive without being intrusive, and impressively knowledgeable.

Rather that following the French inspired norms of structured meals, the menu breaks into some a somewhat confusing array of appetizers, small plates, medium plates, big plates, and sides. Given the diversity of appetites ringing the table, we managed to sample a good selection of the available preparations. 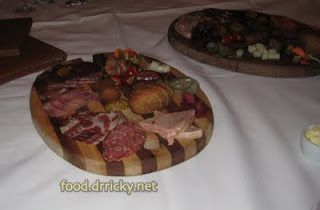 Charcuterie is prepared in house, cured in the beautifully appointed (and conveniently glass walled) wine cellar - impressive given the humid Gulf Coast atmosphere. The charcuterie grand tasting plate contains some real stars, like the fennel packed cured tuna, and conciliatory pancetta wrapped dates, but I think the other cured meats would be better served with contrast against a very good rye bread roll, and a potent selection of pickled vegetables. However, the apologetic separation of these sides muddles the flavors a bit, as the overlapping porkiness tends to get cloying.

Perhaps the star of the plates that I tasted was the crispy pork cheeks served atop dirty rice, crispy and unctuous at the same time, one could fight over the scraps of this dish. We also had some nice rabbit in crepes, as well as some mussels cooked with harissa. Mussels were excellent, and the rabbit was rich. I also ordered some lamb tenderloin cooked with Moroccan spices, and while the meat was done medium rare, I don't think the dish was a success. The texture of the chewy lamb clashed with the coupled sausage, and the spices would have worked better had this been a stew. Fortunately, I got to taste the pork shoulder preparation, which was meltingly tender, although I think needing some acid component.

For dessert, I ordered the spicy chocolate creme brulee which came with home made marshmallows atop the sugar crust. This didn't work - the marshmallows themselves were good, but the chewy nature just interfered with getting to the brulee. Next time, serve it on the side...perferably atop a proper hot chocolate for  chocolate overload. The brulee itself was appropriately spicy, and enjoyable. Most of the table was agog over the bananas foster, which was prepared tableside with appropriate theatre, but really, that's not a difficult dish to make.

Overall, Delmonico's feels like a good celebratory restaurant, but it's greatest strengths seem to lie with pork. But eating here does tend to induce a food coma.
Posted by Dr. Ricky at 12/12/2009 10:02:00 AM