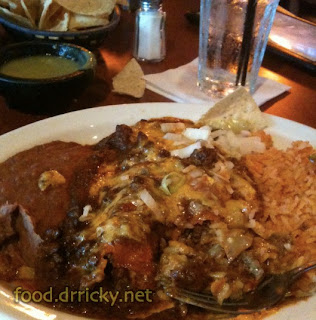 On the recommendation of local Houston Food Explorer (and probably living treasure) Jay Francis, we went to check out the enchiladas at Molina's (I must warn you, an animation with music plays immediately on load). The key there is like getting a core sample of Tex Mex cuisine history, as Molina's apparently serves enchiladas with old style chile con carne gravy. Indeed, on the menu, the relevant enchilada is prominently labeled with the sign "Since 1941". The enchiladas were fine, the gravy quite tasty. Rich in flavor, but not very spicy at all.

But then, this thing came out, and I don't get it. 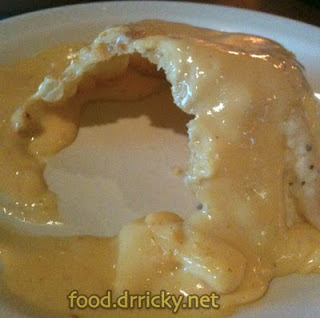 It appears to be a corn tortilla, fried into a bowl, and served upside down, before being covered in some kind of pasty cheese sauce. What's the point of this thing?
Posted by Dr. Ricky at 12/17/2009 11:11:00 AM