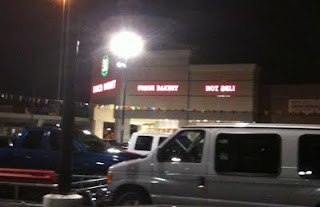 The area bordering I-10, Bunker Hill and Blalock is now Grocery Row - never mind the presence of the large mega mall near by, in this area, we have the huge HEB grocery, a Costco, the Korean supermart Super H-Mart, and now (grand opening today) , 99 Ranch market. The newest addition is ubiquitous chain in California, but this outpost is the first incursion in to the Texas market. They're not entering an easy situation - Houston already has its share of mega-Asian markets, ranging from Viet Hoa, to Hong Kong City Mall, and any number of additional markets around, mostly centered in the Southwest Bellaire region. And they all carry mostly the same goods, in roughly the same price range, so differentiating from each other will be difficult. The Sino-centric 99 Ranch is opening in an area at the moment served only by the Korean-centric markets, so they'll manage to distinguish themselves in this region. I paid a visit to them prior to their grand opening, when construction is still afoot in some small corners, and tenants are still sought for the small accessory store spaces in the building. 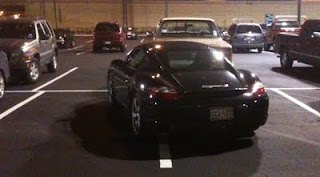 I happened to be parked next this spectacularly considerate (not) driver of a sports car.

So, how was it? On first blush, 99 Ranch compares well with other Asian supermarkets here - prices are comparable, produce is fresh (I couldn't help but pick up some really cheap fuyu persimmons), although some are prepackaged in plastic bags (ie, greens). Speaking of packaging, they're really overboard with the packaging here. I got things that were wrapped, wrapped again, and then bagged. Could just be the pre-opening jitters.
So, what is different? First, there is a more concerted effort to appeal to the Texan mainstream. Staffers are in all ethnic stripes, from Hispanic to Indian to the Caucasian lady manning the buffet line (more on that later). And they're all working extra hard to make a good impression this early in the game. A necessary consequence is the effort to communicate in English, even if the customer appears to understand Chinese or Vietnamese. In another nod to the neighborhood which can be cash averse, credit card terminals are everywhere, and unlike in the Bellaire shops, they don't request (require) a minimum to charge.
Unlike the other Sino-centric shops in town, they have a dedicated Indian Foods section. Not just an aisle, but a separate alcove complete with freezer section and displays.
But what will bring me back here would be things that I can only locate in this store. And that will come from the prepared foods that they sell here. Despite the appeal to American mainstream sensibilities (ie, labeling pictures of zongzi with "Chinese Tamales"), the air of authenticity shines in the food court. I found a counter selling Sichuan style cold snacks and pickles. The dimsum counter sells various dumplings and snacks appealing to the Chinese tastes - I picked up a sizeable bowl of beef noodle soup for $3.
The takeaway buffet line is an interesting concept. You get either a small ($3.50) or a large container ($5), go through the steam table, and pile on whatever you want. As long as the container still closes, that's the price you pay. Dishes on the steam table are not the usual sorry state of fried crap found in "Chinese" buffets around town. This small unapologetic table carried bitter melon stir fried with beef, and whole small fish (head still attached, yes), and mushroom and tofu stew. Turnover appeared brisk.

Over on the sushi counter (yes, a sushi counter - they did carry sashimi grade fish here), I spotted maki made with purple rice. Hmm...I didn't think that stuff made for good sushi. But the presentation was eye-catching.
The bakery, though, called Desir, is probably the mini-store I'll come back here for. For one thing, most of the loaves of bread are packaged without the "end cap" crusty slices...and all those endcap slices are packed together and sold for cheap. A very practical solution, no unexpected in Chinese immigrant sentiments. The bread here is of the fine textured sort favored in Asia, not quite that crusty, although I did find a walnut "bagel" - which didn't have the same chewiness as a regular bagel. I saw bags of pan de sal as a nod to Filipino clientele, but didn't have a chance to sample them. 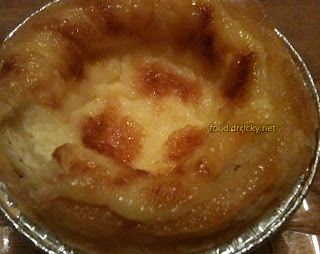 Pasteis de belen - I picked up and tried this properly labeled "Portuguese egg tart". Unlike the flat, yellow tarts common in dimsum houses, these tarts are sunken in the middle and browned, indicated a rapid, high heat baking. But creamy on the inside, not too sweet, with a nice flaky crust. 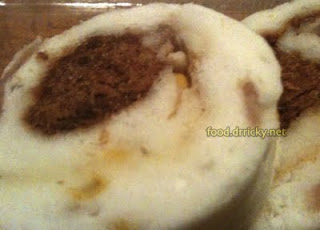 Pork sung and radish pinwheels. Another innovative thing I tried are these pinwheels made from the same steamed dough as mantou, but rolled around pickled radish, and flaked dried pork. Sweet, savory, and texturally a riot. 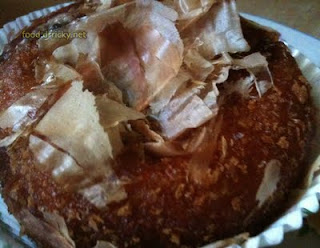 I also tried this "teriyaki bun" - those things that look like wood shavings are shaved dried bonito (often used to make Japanese dashi). The teriyaki glazed bun is baked around...a fish ball. Probably made from pollock.
An intriguing store, worthy of additional visits.
Posted by Dr. Ricky at 11/06/2009 03:16:00 PM