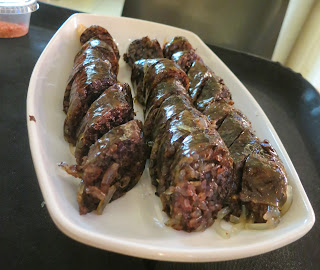 People have a tendency to jump on these diet fads whenever scientific evidence shows even preliminary glimmers in a certain direction. Once a social structure forms around this diet notion, the trend tends to persist even if the science goes contrary to the original conclusion. Be it gluten-free, low carb, paleo, ketogenic, calorie restrictive — most of these start with some kind of scientific or quasi-scientific notion, and is extrapolated to cult status. Getting to the start of such a movement would be a fascinating observation.

And maybe we are at the start of such a new fad. But I dare people to get started on this. In September, the team of Jeff Gordon in Washington University, headed by Vanessa Ridaura, published a tour de force article in Science. It's worth describing in some detail. First, a little background: if you aren't aware by now, a human body is really a constellation of microbial communities in addition to the human cells. There are about 10 bacterial cells for every human cell, and one of the more recent changes in our thinking is that some microbes aren't just friends, they are us. Alterations in the microbiota, by antibiotics or by other means, have drastic effects on human health. We are only recently starting to understand this, that it can affect everything from immunity to behavior.

In this paper, the group located some obesity discordant identical twins. That means finding twins who are genetically identical, but one is thin, and the other is, well, plump, and collected poop from both of them. Then they seeded the gut bacteria - ok, they fed the poop to genetically inbred mice that had been cleared of endogenous bacteria. Now they have incubators of the microbiota from the humans. The mice were then both fed the same diet - low fat, high fiber - guess what? Mice seeded with thin poop stayed thin, plump poop, got increased adiposity (that's scientifically accurate term for "got fatter").


This buys into this idea that the bacteria lining the gut is the gateway of nutrients into the body. It's the population that determines what eventually makes it into the system. It also says that obesity is potentially communicable. Or is it? The investigators then co-housed the mice. If obesity is transmissible, then if the mice are co-housed, the mice seeded with "plump poop" can transmit the bacteria to the mice seeded with "thin poop", and then everyone gets fat and happy.

The exact opposite happened. Co-housing prevented mice seeded with "plump poop" from getting fat. Seems that it's thin-ness that is communicable, and that it can in fact prevent obesity. The paper goes into dramatic detail analyzing the specific biochemical pathways that are different between the two microbiological populations, pinpointing the subpopulation of bacterial species that may be the biggest contributors, and even modeling the biochemistry underlying the potential differences in digestion. But I doubt if most people will try to understand it to that detail. This is sufficient preliminary information to make "thin people poop" the next crazy diet fad.

So much for the scary aspects of eating shit.

Disclaimer: this is very preliminary work - this is to illustrate how basic science works, and to highlight an exciting development that has fundamental implications for our understanding of human physiology. This is not an endorsement to go around eating poop indiscriminately.