Bitter fruit. Or not. 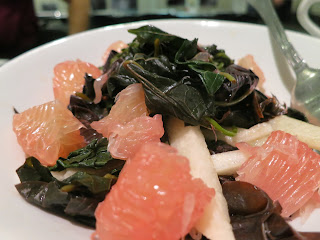 It's gotten a bit chilly in the Gulf Coast, and that usually means a few things. Oyster season is here, and Gulf oysters are cheap, plentiful and delicious. It's also the thick of the Texas citrus season, and among the varieties grown here is the somewhat famous Rio Red grapefruit. What you may not know is that it is the product of using radiation to scramble the plant DNA.

This type of wholesale mutagenesis seems to sit fairly well amongst people who are concerned about genetically engineered (GE) plants. Although commercialized GE plants have specific traits with well known modifications, critics often cite the possibility of unintended consequences. Yet what could be more rife with unplanned results than random mutagenesis - yet these practices don't bear the scrutiny and political handwringing that GE plants do.

So, how would we go about developing grapefruit nowadays? A little lesson then in science transparency. The choice of selecting the Rio Red was to find a less bitter grapefruit. As it turns out, the main bitter component in citrus is a type of isoflavonone glycoside - I won't go into the long specific chemical names. Suffice it to say that there are two related compounds, very similar to each other. But one is bitter, the other is tasteless. And how bitter citrus is depends on the ratio of these two. Which is made by two different genes, creatively named Cm1,2RhaT (bitter) and Cs1,6RhaT (tasteless). And so, modifying just how these two genes are controlled or programmed determines the bitterness levels of most citrus. This is the power of leveraging the power of modern biochemistry and genomics. We can understand and modify to get a specific change with greater control than in the past.