The science of sweet corn 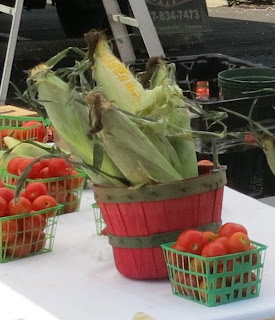 The most commonly grown crop in America is no doubt corn, but that isn’t the variety most people are accustomed to. In fact, the majority of corn harvested in America isn’t fit for direct human consumption; what people usually think about, particularly in the summer, is sweet corn. Sweet corn itself has a storied and scientific history.


You’ll recall that there’s a direct relationship between sugar and starch. Both are chemically carbohydrates, but starches are made by stitching sugar molecules into larger molecules - hence, sugars are often called simple carbohydrates, and starches are complex carbohydrates. Starches are primarily made by plants (the animal cognate is glycogen), and can have varying properties depending on the sugar composition and arrangement. But primarily, starches don’t taste much (hence, the term “starchy” isn’t a compliment when it comes to cooking). Sugars, on the other hand, is what we perceive as sweet, but make for poor storage as they are quickly degraded by microorganisms. Plants wanting to store carbohydrates for the long term enzymatically convert the sugars into starch. Sweet corn has a genetic alteration in their ability to complete the conversion of sugar to starch; it is slowed down dramatically. Thus, when harvested quickly and cooked to kill off the enzymes, the corn kernels taste sweet.

The problem with sweet corn was that the sugar to starch conversion didn’t stop completely - it was just slowed down. But not slow enough. Early sweet corn crops had very narrow harvest window, perhaps a day, before the flavor deteriorates. Hence, the notion that to get the best corn flavor, one must first set the pot to boil before going out to harvest it. A couple of additional gene variants were later discovered that increased the sugar content (hence the term “supersweet”), lengthened this harvest window, and softened the hull for eating purposes - but this also made for a more fragile product and more fastidious growing conditions.

Modern sweet corn crops now come from the various combinations of these genetic traits. Corn is a particularly complicated item, as each kernel in a cob can be a different combination of genetic traits, apart from the primary features of the plant itself.

So, as you much on those dewey cobs, or the smokey cups of elotes, remember that what we enjoy now is the cumulative work of genetic engineering and agricultural innovation.