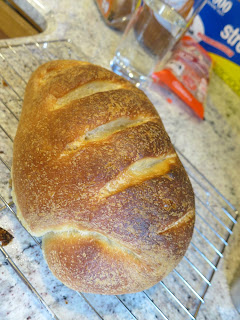 I've mentioned before that I love baking bread. In part because it is such a fine art balancing out the sciences of microbiology and biophysics in getting a good product out - and there really aren't that many failures. In general, for bread baking, a hot oven is needed. That's because race is happening: the heat causes the carbon dioxide bubbles and water to expand within the loaf to create the holes, but at the same time, the crust is also hardening to hold it in. The crust also browns - providing additional flavor. The browning, of course, is the product of the Maillard reaction, and is promoted by heat and inhibited by moisture. Thus, as the bread dries out on the surface, that's the hardening and also the browning. 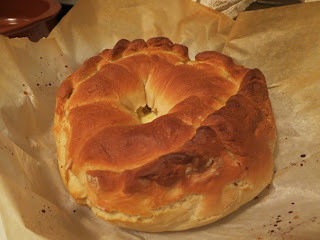 Two other things promote the browning: increasing the pH (the opposite of acidity - alkalinity) and increasing the protein content. I like brushing on a layer of milk to do so. For bagels and pretzels, those breads are first boiled in a pot of alkali (it could be as harsh as lye, but baking soda will work), and that results in the distinctively brown and chewy crust. 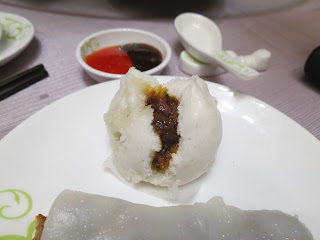 Or, you can make the two phenomena happen at different times. In Asia, there's a tradition of steamed breads. Often stuffed with fillings savory and sweet, these breads eschew the crust altogether, prizing instead the fluffy texture that steaming affords. But who says you can't create a crust when it is desired?

Steamed bread dropped into a deep fryer will develop a nice crisp crust, while retaining that fine crumb and fluffy texture therein. This is, in a way, no different from how sous vide cooking of meat is done in two parts, where the moist cooking is done first before the final dry high heat is used to finish the dish with Maillard complexity.
Posted by Dr. Ricky at 3/08/2013 02:34:00 PM