Crab is such an interesting animal for many diners. For one thing, there's the challenge of getting the edible parts of the animal. Confronted with a large crab, many first time diners are more perplexed than solving a Rubik's cube. I'll bet there won't be a hue and cry when someone reveals mechanically separated crab meat. 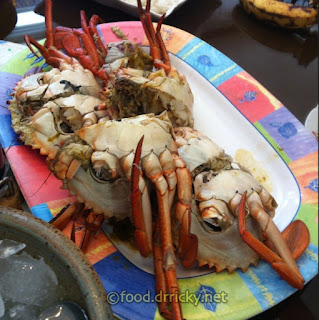 For simplicity, some crab species are marketed from just the easy to eat body parts. Alaskan king crab are harvested primarily for the legs, and Florida stone crabs for the claws. Given that crabs can regenerate limbs (albeit slowly), maybe one way to domesticate the animals is by keeping them in dense factory coops, lopping off limbs as we need them. After all, just catching Alaskan king crabs is a dangerous job. I'm not sure even PETA would object to this. Maybe we can bribe them with sushi. 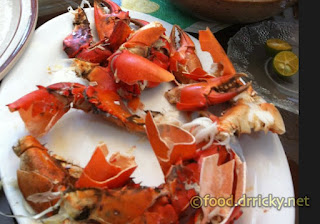 Texans unaccustomed to manually digging through the nooks and crannies of the animal often opt for soft shell crab. What is it, exactly? As it grows, the crab has to discard its hard outer shell. If you catch the animal just after it removes the old shell but before the new one has hardened - you can eat the whole thing. It's a self-fileting system.

A shell-less crustacean is very vulnerable indeed, and the molting process is carefully regulated by a series of hormonal checks and balances. You can bet, however, that once we get a good handle on this, we will make captive crabs molt on command - and thus, soft shell crabs need not be a seasonal item any more. In fact, why stop at crab? Soft shell spiny lobster, anyone?
Posted by Dr. Ricky at 8/10/2012 04:20:00 PM