An ode to dessert

I once read that if you knew 100 magic tricks, but only had two ways of demonstrating them, you'll appear to know only two tricks; while if you know only two tricks, but 100 ways of demonstrating them, you'll appear like a genius. As the endcap, dessert can represent the most memorable portion of a meal. For ill or good, the final impression may indeed be the most indelible.

Which is probably why desserts in Houston tend to be remarkably staid and safe. Using croissants as the basis of bread pudding is already daring enough to be worthy of awe. But reaching beyond the pecan pies, the ice creams (often proudly labeled as factory created by the nearby favorite Blue Bell), the red velvet cake - that's territory rarely tread upon by Houston restaurants. Why rock the comfortable boat?

Because the range of potential desserts, sweet and otherwise, present an opportunity. 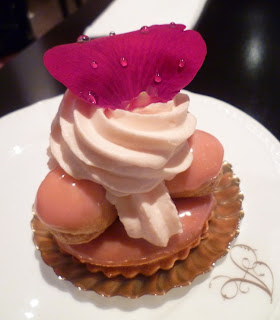 Uchi Houston is one of the few restaurants that put multicomponent complex flavors into desserts. I hold out hope that perhaps dessert becomes less of an afterthought, but a planned crescendo and denouement to meals. Things don't always have to end the same way.