The definition of food

On a recent visit to a friend's house, I noticed a decorative palm tree in the yard heavy with ripening fruit. 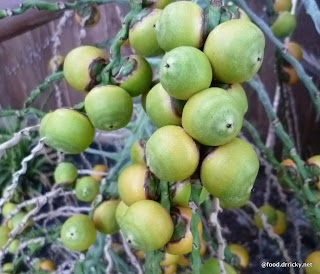 I picked a ripe one, examining it for a while. "I wouldn't eat that if I were you", came the cautionary warning. 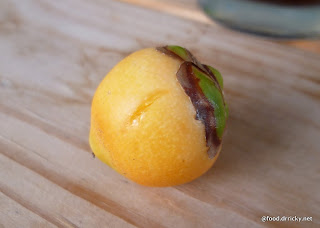 After cracking it open, I took a taste. It was quite good. This, as it turns out, is the fruit of the pindo or jelly palm, and, like the loquat, is seldom sold in Houston markets, despite being commonly grown as decorative plants.

The very concept of food is something that is shrouded in debate, science and superstition. It's the product of a culture despite its close ties to the scientific basis of nutrition. Why else would mainstream America find the heads of fish inedible (even as the filets from the bodies are prized) while conveniently accepting quasi-non-milk "milk" as health food? We read often nowadays of an impending food crisis, that food shortages loom as our population outstrips our capacity to grow conventional crops or raise domesticated vertebrates, but the edible options for an omnivore are vast.

Sharing a common definition of food, however, is a visceral aspect of cultural identity. Humans create bonds by sharing meals, and divide into groups depending on what subgroups opt to eat or not to eat, be they vegans, entomophagists, Muslims, or teetotalers. And this shared definition of food (and its requisite implication of what is not food) can be held hostage by a wily set of suppliers. Ad campaigns paint a meat centric diet as the "proper" acceptable meal, or "organic" food as being the only acceptable kind - and are both likely driven by similar motives.
Take back the control of the definition to food. Be responsible for the knowledge of what is edible and what is delicious. Test, try, make mistakes, and learn. Be accepting of others with different dietary definitions. And, then, perhaps fear turns into adventure.
Posted by Dr. Ricky at 7/11/2011 01:39:00 PM