Three stars and the sun 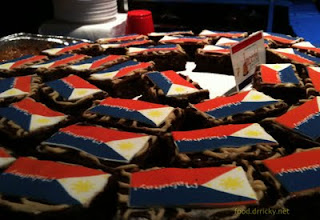 In the aftermath of the weather related calamities visited upon the Philippines a couple of weeks ago, a local Filipino American group called the BahalaNa Tribe organized an Adobo Hoedown on October 18th. Although ostensibly a cook-off featuring the vinegar/garlic scented national dish of the Philippines, what actually emerged was a festival of music, cuisine, karaoke, martial arts, graphic design - a veritable circus in celebration of Filipiniana housed at the mixed arts space Diverse Works. 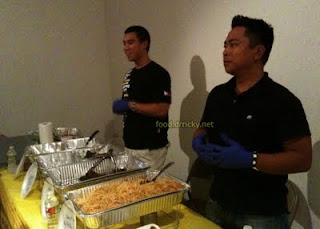 Plenty of food was to be had. Ranging from traditional plate lunch style servings, to Filipino baked goods, more American bake sale items like pecan tarts, and of course, the actual sampling of various versions of adobo prepared by cooks of earnest and professional caliber. The adobo versions prepared ranged from traditional to avante garde. Jonathan Jones of Beaver's wore his fondness of the Filipino culture proudly, decorating his table with photographs of his trip to Banaue and beyond, and preparing a smokey grilled stew. Other entrants included wet preparations, dry ones, spicy ones - but the pickled papaya was a real stunner, complimenting the rice and adobo rather well. 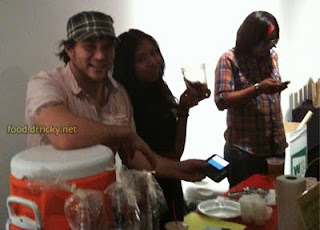 Of course, one cannot forget the notable Plinio Sandalio and his adobo ice cream (red striped hair to the left). I must admit, Plinio captured the adobo flavor in the ice cream, although the responses from the unprepared was generally comical. On the same station here are the Tuscany Coffee pair, David and Ecky, presenting a collaboration with Randy Rucker on iced coffee with ube. 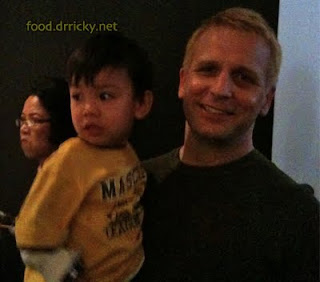 In the end, though, it was about the people, and the good cause that this supported. The Bahala Tribe did a great job assembling this affair, which I unfortunately had to leave before the event closed. So, I don't know who actually won this handcrafted trophy. Anyone? 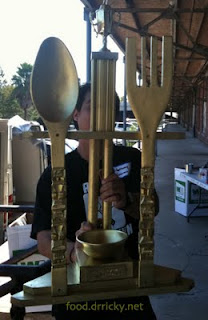