The physics of frugal fluffiness

I've recently become fascinated by Hokkaido cupcakes (sometimes just Hokkaido cakes). The only purveyor I know of is the recently opened Kamalan Bakery in the ever expanding new Chinatown region of Bellaire in Houston. Based on my research, despite the name, the cake didn't originate in Japan, but rather in the ethnic Chinese enclaves of Singapore and Malaysia. It's a product of leveraging physics and frugality to accomplish a delicious product. At its core, the cupcake is a chiffon cake - a close relative to the angel food cake - the latter is basically a prime example of a physically leavened cake. Rather than using chemical leaveners such as baking soda, an angel food cake relies on a lot of egg whites beaten into a semi-stable foam to produce it's airy structure (some manufacturers may cheat, however, and use the foaming qualities of detergent to accomplish the same thing without less labor). In the chiffon cake, the egg yolks are not discarded, but used to emulsify and incorporate additional flavoring ingredients. At its most basic, that could just be some milk and oil, but any number of flavoring components can be used. Flour is then added, but at a smaller ratio since the gluten formed toughens the cake. The beaten egg white is folded in last just before baking to produce a fluffy cake much prized for its texture.

In a sense, a chiffon cake is basically a stabilized soufflé.

Due to the delicate nature of the foam, it needs to cling to the edges of the pan to promote rising, thus, chiffon cake containers cannot be lubricated for ease in unmolding, and the cake must be cooled upside down to avoid collapsing.  When baked in a flute pan with a central chimney, this is possible, but as a cupcake, cooling upside down is impractical. But the ever frugal inventors came up with a clever solution: reinflate the cake with filling: 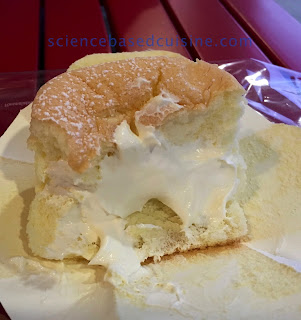 A Hokkaido cupcake puts the Twinkie to shame with filling abundance. It can be filled with any number of fillings, from custard to basic whipped cream, flavored or unflavored, which serves not only to provide flavor contrast, but also provide basic structural properties to the cake. Numerous recipes and videos can be found online, though most will be Southeast Asian in tenor.

Note also the use of square cardboard cupcake liners. These are quite clever - the traditional fluted liner is there to facilitate removal from the pan due to the no-grease requirement, but still requires a traditional cupcake pan mold. The cardboard cups provide sufficient strength on their own to be used without the pan mold, and the square shape allow for more efficient use of oven space. However, they seem to be rather difficult to find in American groceries.
Posted by Dr. Ricky at 10/29/2015 02:02:00 PM