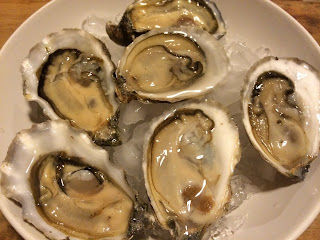 The other night, over a bowl of menudo, we had a discussion about "shocking" foods. While some immediately drew the line at even trying tripe, at least one person boasted about trying lutefisk, balut, and century eggs. These exotica aren't really all that wild - certainly balut and century eggs are readily available in the Asian megamalls here in Houston. What intrigues me to get is the elusive tamilok or edible shipworm.

Sometimes referred to as the "termites of the sea" - shipworms burrow their way into wood, and are seen as a pest to the shipping industry. Numerous species abound in the oceans, but the edible shipworm, the tamilok, is found in mangrove trees in Palawan, the Philippines (I've seen unsubstantiated references that the name comes from the English "Tommy, look!", but i can't confirm the etymology), and is often served in kilawin ("cooked" in vinegar). It's often described as tasting vaguely of oysters - although the addition of so many strong flavors may mask it. That's not so unusual because, well, the shipworm isn't a worm at all. It's actually a bivalve mollusc, like an oyster or a clam.

Now, how a shipworm lives on wood as its diet actually depends on the microorganisms it harbors in its gills - much like a termite relies upon symbiotic bacteria in its gut to digest the wood it consumes. Wood, believe it or not, is mostly a carbohydrate called cellulose, and unlike starch, isn't so easily digested into sugars. Various types of cellulose, from paper to switch grass, represent stores of locked up energy, and the biofuel industry seeks out cellulases for industrial production of ethanol from cellulose rather than starch. And shipworms carry a different set of bacteria for it's cellulosic diet, representing a potentially valuable trove of tools to fuel the ship, even if the mollusc itself dines on the hull.
Posted by Dr. Ricky at 11/13/2014 02:52:00 PM